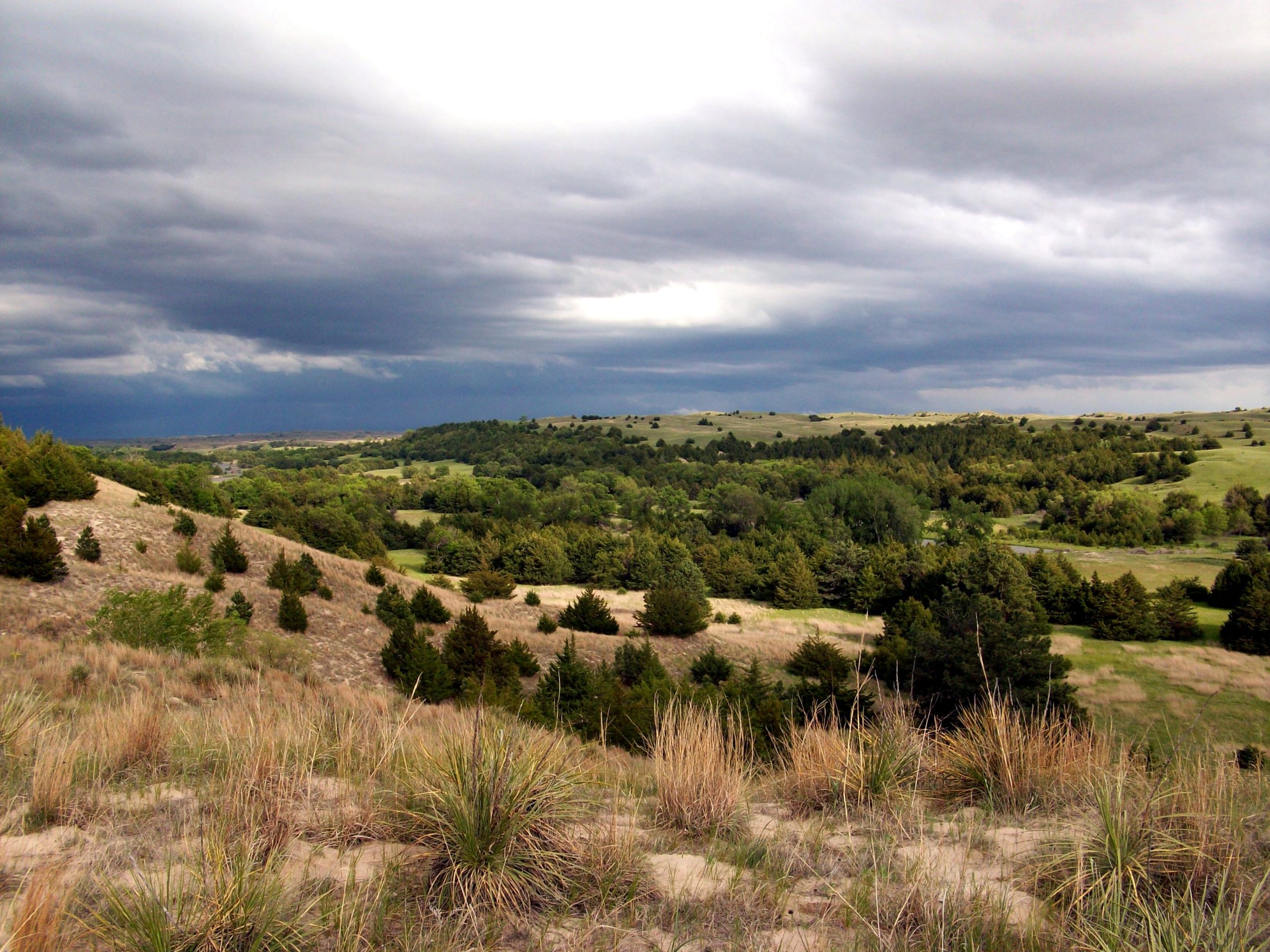 Land Acknowledgment:
Halsey, Nebraska is native to the Cheyenne, Oceti Sakowin, and Pari (Pawnee) tribes. The land was later claimed by early western settlers in the 18th Century, who formed small communities structured by farming and Christianity. Paying homage to the ancestral lands and the indigenous tribes who inhabited the area divulges the historical loss of vital information beneficial to understanding the environment.

Topography:
Central Nebraska is one of the largest contiguous and least disturbed prairies suitable for ranching, abundant water sources and native wildlife. The sandhills of Nebraska extends approximately 265 miles across the central and northwestern High Plains region of the state. These immense sand dunes were formed by loose sediment deposited from the winds after the last ice age. Surprisingly, some of the sandhills extend up to 400 feet high.
Although this location may appear dry and arid, the sandhills allows for precipitation to quickly percolate through the coarse sandy loam soils into the Ogallala aquifer (the largest groundwater system spanning from South Dakota to Texas and located beneath most of Nebraska). Water also accumulates between the sand dunes forming sub irrigated meadows which allows for plant roots to have access to a direct aquatic source close to surface level.

History:
A botany professor from University of Nebraska, Dr. Charles E. Bessey, and former Chief of the USDA Division of Forestry, Dr. Bernhard E. Fernow, devised a plan to grow trees in the sandhills. Fortunately, in 1891, Bessey and Fernow successfully planted several coniferous species in the spring. Aided by the first U.S. Forest Chief, Gifford Pinchot, Bessey was able to persuade then president Theodore Roosevelt to create three forest reserves in Nebraska.

On September 6, 1902, the location of the first seedbed was staked and the first seed (ponderosa pine) was sown on November 13, 1902. With the 1902 establishment of the Charles E. Bessey Nursery in central Nebraska near the Dismal and Loup River System, it became the first federal seedling nursery. Eventually, the Bessey Nursery began producing trees for one of the world’s largest man-made forests. Bessey anticipated on providing timber for early settlers in the great plains under the Kinkaid Act of 1904 (boundless trees distributed to farmers and ranchers) as well as timber for the railroads. However, Bessey’s initial vision did not become a reality, the nursery faced many challenges and became a training facility for nursery laborers. Innovation allowed the nursery to evolve as the facility managers efficiently increased tree seedling production and cultivated the land.

Approximately 46 acres of irrigated seedbeds are maintained for bare root production. Current production of Bare root crops is 1.5 million per year but at full capacity about 4.5 million Bare roots can be produced. This location was selected because of the sandy soil, abundant subsurface water, and a good location to reclaim the land.

Cones and seeds are collected by the U.S. Forest Service districts (Region 2), the Bureau of Land Management, Bureau of Indian Affairs, and other states. The seeds are directly sent to Bessey Nursery and stored inside the Seed Bank. The Seed Bank holds approximately 15,000 pounds of conifer seeds. The four main species stored are Engelmann Spruce, Douglas Fir, Ponderosa Pine, and Lodgepole Pine. However, other conifers and deciduous tree seeds are stored here as well. The conifer seeds are placed in a freezer below 9-10% moisture at 5 to 10 degrees Fahrenheit. While the larger deciduous seed are placed in the stratification unit at 34 degrees Fahrenheit.

The Future:
Bessey nursery is currently undergoing construction to expand their container seedling facilities. Hopefully by Fall 2021, the 32,000 square feet of controlled greenhouses along with storage space will be completed. With the new installations, we are expecting about 750,000 to 1,000,000 seedling production added to our container capacity. In addition, the main office is fully stocked with historical information and guides about the nursery and the ranger district. Therefore, if you are ever in the area please feel free to stop by and ask the staff about the nursery tours.
Nebraska National Forest and Grasslands is important for its wildlife, aesthetic, recreation , and ecological values. The sky is in perfect view and the rolling sand hills, some rising as far as 400 feet is a sight to take in and appreciate. Although this location is great for animal husbandry such as raising cattle or horses the land managers has put the area to good use with the future of forestry in mind. This living monument of over 100 years old continues to thrive, providing land stability, wildlife habitats and improving air quality at this very moment.