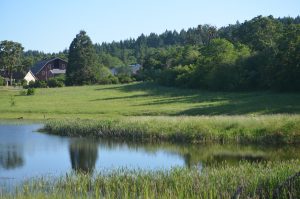 Overlook Pond with the Refuge Headquarters in the background.

William L. Finley NWR is one of three refuges in the Willamette Valley National Wildlife Refuge Complex.  Ankeny NWR and Baskett Slough NWR are also a part of this complex.  At all refuges, you will find many diverse habitats like oak savanna, wet & dry prairie, riparian forest, old growth forests, and wetlands; these habitats are home to many native species of plants and animals.  In fact, the largest remaining native wet prairie habitat in the Willamette Valley can be found at William L. Finley NWR.  Wet prairie is a type of wetland that is seasonally flooded.  All three Refuges have many opportunities for hiking, photography, wildlife watching, and enjoying the biodiversity of the Willamette Valley.

A fact I learned about the National Wildlife Refuge System is that each Refuge is initially established to protect and conserve a native species dependent on the Refuge’s land and waters.

William L. Finley NWR, which spans over 5,000 acres, was first established to provide wintering habitat for the Dusky Canada Geese, a subspecies of Canada Geese.  They breed up north in the Copper River Delta of Alaska and winter solely in wetlands of the Willamette Valley.  Drainage of wetlands for agriculture in the Willamette Valley has made the Dusky’s more vulnerable to population loss.  William L. Finley NWR as well as the two other NWR’s in the complex work with farmers to ensure that the Dusky Canada Geese have ample habitat and food supply to make the long trip back to Alaska.  Unfortunately, I arrived right after the Dusky’s headed north but there are lots of waterfowl at the wetlands! Interestingly, some of the land that the geese feed on in the winter leads to ideal nesting habitat for the Streaked Horned Larks in the spring and summer.

Currently, the Refuge protects a wide range of wildlife including: plants, such as Golden Paintbrush and Nelson’s Checker-mallow, an insect, the Fender’s blue butterfly and a ground dwelling bird, the Streaked Horned lark.

Not only does the refuge conserve wildlife, but it also conserves the cultural history of Benton County.  The land that is now the William L. Finley NWR was sold to the U.S Fish & Wildlife Service in 1964.  This land included several historic buildings and barns, including the Fiechter House, said to be built in the 1850’s.  Considered to be one of the oldest buildings in Benton County, the Fiechter House is a popular site to visit and get a glimpse of what life was like 150 years ago. 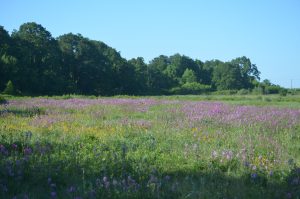 I have been here for over a month and the days already seem to be flying by.  I feel extremely lucky to be able to observe the Larks everyday surrounded by beautiful mountains, forests and wetlands.  Every morning out in the field, there is something new to discover, like a Lark nest, an interesting behavior or even a bird I have never seen before.  I had only seen a Bald Eagle once before, and now, I see them regularly hunting at the wetlands.  I am excited to continue to monitor the Lark’s during their nesting season and observe the transition from springtime to summertime. 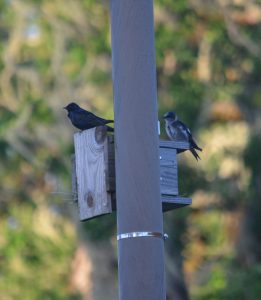 Nest boxes can be seen throughout William L. Finley National Wildlife Refuge. These are Purple Martins. 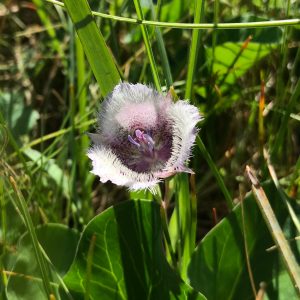 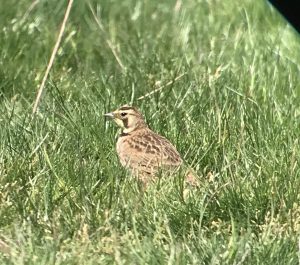 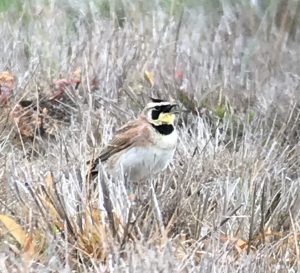