I hope everybody is enjoying the start of summer and the year of cicadas! Well, only for those living in Washington D.C! Cicadas are interesting creatures, to say the least. These insects show up every 17 years and make quite the commotion! For some, they are a nuisance. But, a few indigenous nations see them as sacred beings. 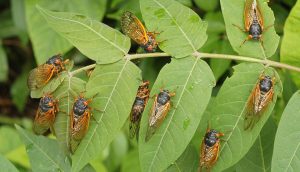 The Onondaga, a nation of the Iroquois, is one of many tribes that indulge in these creatures. “We try to share the knowledge with our children,” she said. “These beautiful cicadas saved our people from all that destruction and oppression. Since then we’ve maintained our own government and way of life all these years” (Pember). This is an example of oral tradition, one that is passed down through generations by word of mouth and is not written down. Through this oral tradition, their tribal members show respect for their sacrifices in the past. If you are interested in learning more about cicadas, and their relevance to Indigenous culture, I suggest reading this article by Mary Pember.

While Native Americans seem to be only remembered in the past, one of the many roles of the modern-day Native American is to educate the public about their traditions and history. Native Americans have been displaced for years, persecuted and many have been forced to stop practicing their native traditions. But, in recent years America and the United Nations have made a conservative effort to advance the self-determination of Indigenous peoples and cherish their traditions. This can be seen in recent documentation such as UNDRIP, which was declared in 2007, and Executive Order 13175 which set guidelines for government and tribal consultations in the US. These declarations set strict guidelines and the country’s obligation to assist Indigenous nations.

Additionally, there needs to be more representation of Native American history within National Parks. Yosemite, Yellowstone, the Rocky Mountains, and countless other national parks were founded after the removal of indigenous peoples. “Many of the landscapes that became national parks had been shaped by Native peoples for millennia” (Treuer). These national wonders were orchestrated by people who have lived on these lands for at least 15,000 years. When America implemented the national parks, native people who called these places home were now seen as outsiders. To help strengthen the Indigenous community, the government should allow native peoples to govern these lands. The positive effects of Indigenous inclusion can be seen in New Zealand and Australia where they control some of those countries’ most significant natural landmarks. Allowing Indigenous people more jurisdiction over national parks will help strengthen communities and undo some of the damage that was caused in the past.