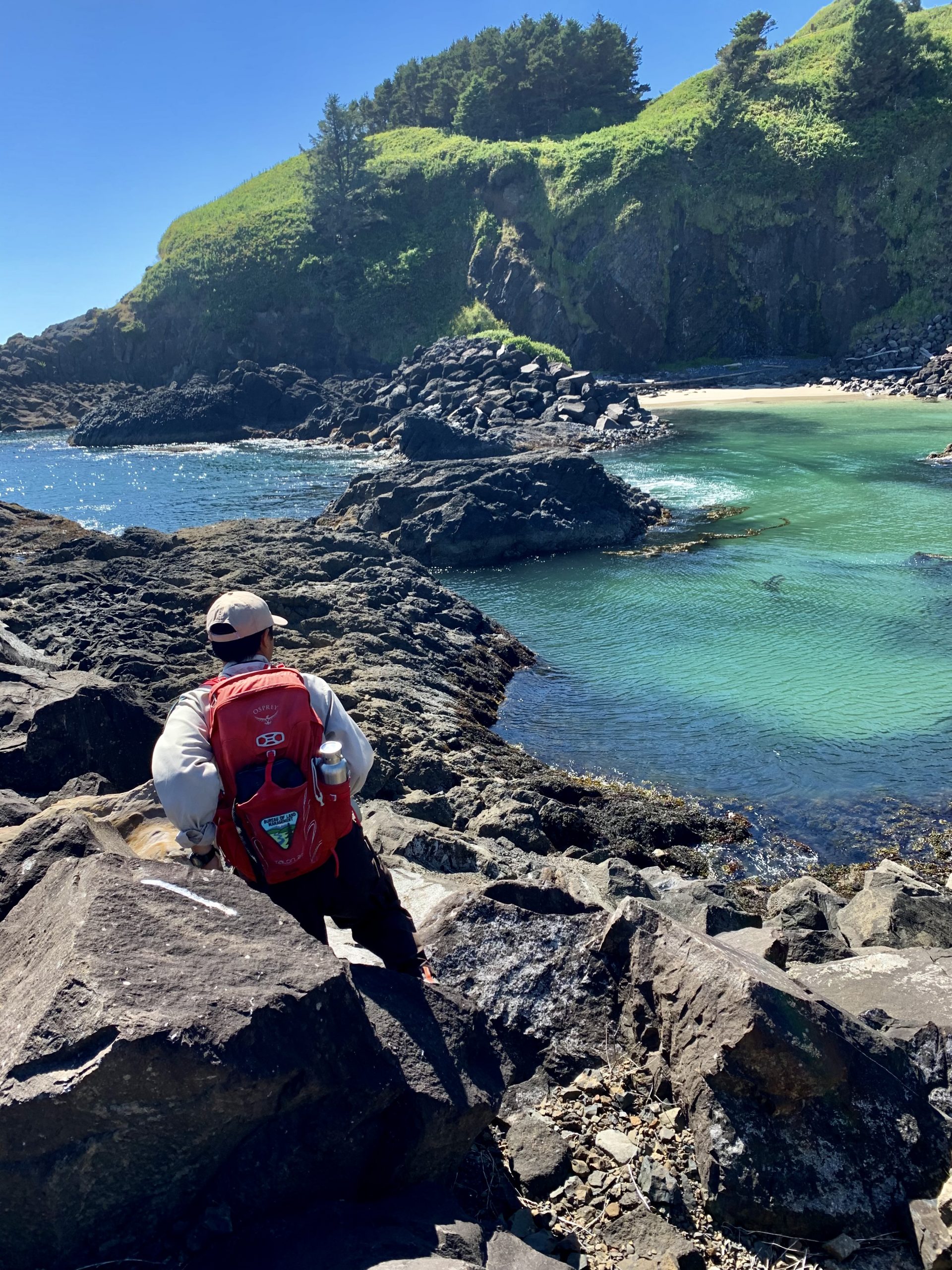 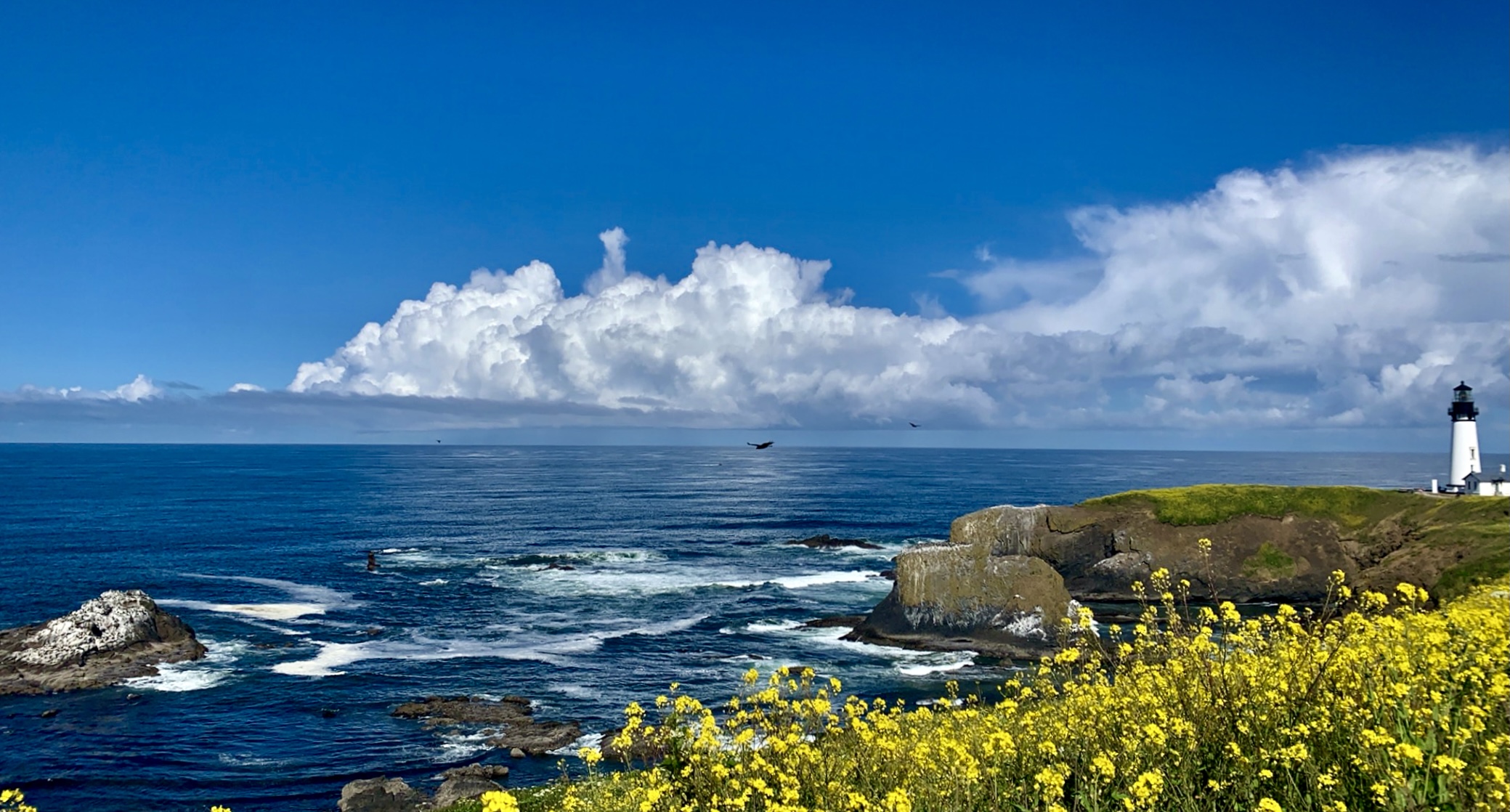 As my internship at Yaquina Head Outstanding Natural Area with the Bureau of Land Management (BLM) and Department of Interior (DOI) comes to an end, I can now fully present my work, as one of the best parts about this position is that my responsibilities evolved as the year progressed. Here are some of my favorite aspects from the past several months: 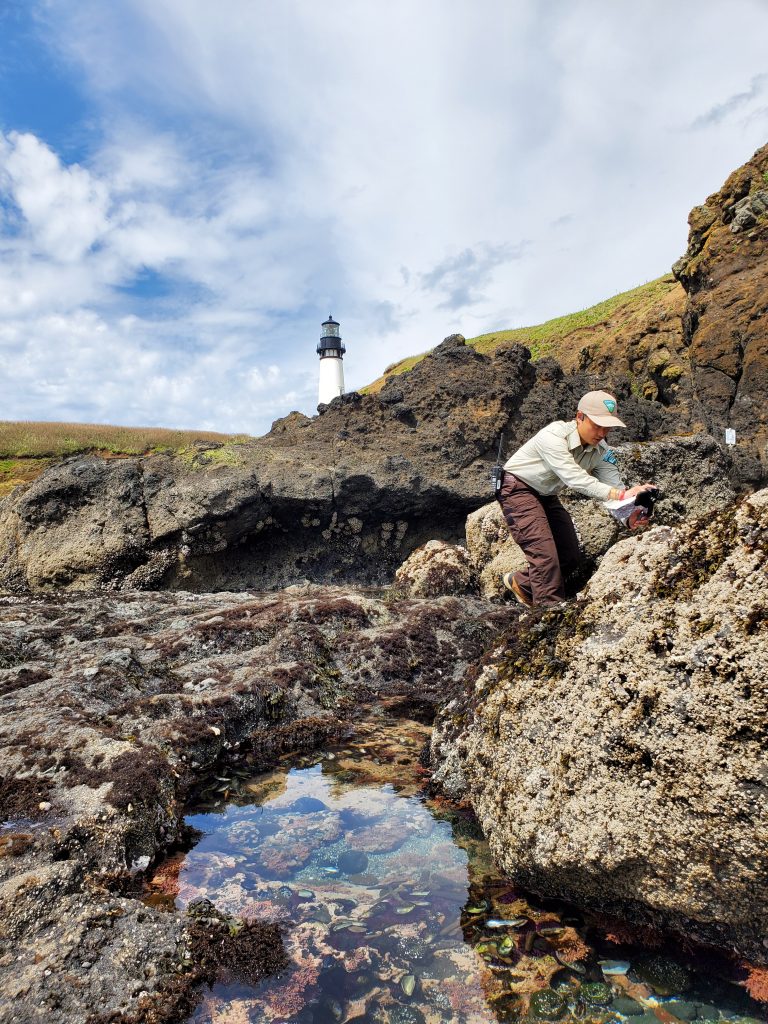 I started this position in April 2021, during the heart of the spring semester for surrounding public schools. Yaquina Head offers curriculum-based school programs covering intertidal ecology, marine wildlife biology, and lighthouse history every year for school groups ranging from kindergarten to high school. As this year’s Education and Outreach intern, I was able to help set-up and present education programs while assisting education technicians with research, program development, and technological maintenance support. Although spring/early summer months normally attract crowds of in-person school field trips to Yaquina Head’s Cobble Beach, arguably the best tidepooling area on the Oregon coast, the pandemic required us to adapt the education programs to an online format through Zoom and some newly obtained technology. 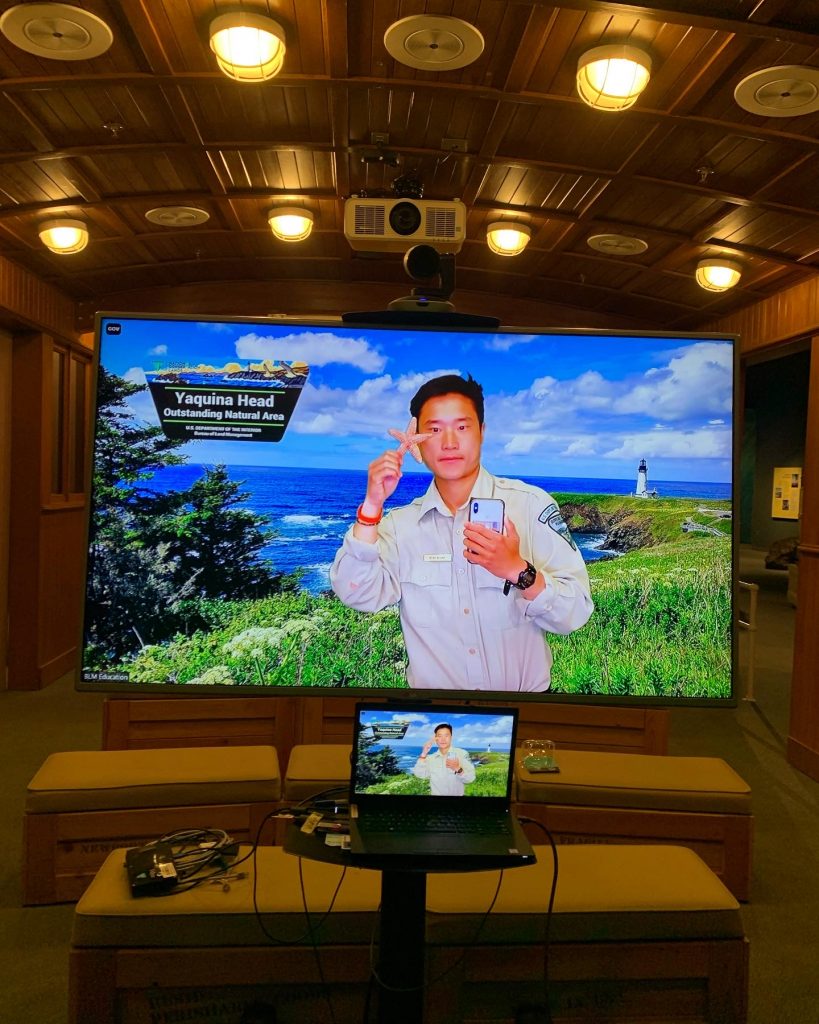 The live, hour-long programs required two rangers: one in our Interpretive Center (IC) and the other in the tidepools (TP). The ranger in the IC would operate in front of a green screen situated across from a TV/computer camera monitor connected to a live, virtual classroom via Zoom. From there, the IC ranger would guide the program’s layout and connect with the online classroom by interacting with different background images behind us. Despite being outside and navigating through slippery tidepools, the TP ranger would also be connected to the Zoom call by using a smartphone, handheld tripod, portable Wi-Fi hotspot, and wireless headsets. Students were able to embark on virtual tidepool expeditions and assist the TP ranger look for different animals in the low, mid, and high tide zones. Once a tidepool critter was identified, its habitat and survival adaptions would be discussed. Wanting to avoid presenting a boring PowerPoint lecture, we incorporated dance, song, art, jokes, poetry, and scientific inquiries to increase audience engagement. The virtual programs were quite a success, despite only being the first year of offering this new, online format;  we were able to connect with over 30 schools and nearly 2,000 students around the country! Although virtual formats may not be ideal, this set-up allowed us to connect with schools thousands of miles away. We also received feedback from both teachers and students, many of whom stated that these education programs were the highlight of the year. Seeing the reaction of students who had never been to the ocean or gone tidepooling was arguably my favorite part of this internship. And there are a lot of “favorite parts” to choose from.

As a EFTA representative, I was able to take the lead in setting up and promoting World Migratory Bird Day (WMBD) at Yaquina Head. Commonly seen birds on the headland and along the surrounding rocky beaches include peregrine falcons, brown pelicans, oystercatchers, pigeon guillemots, harlequin ducks, blue herons, turkey vultures, common murres, bald eagles, and cormorants. In previous years, visitors were able to enter the Interpretive Center to observe and interact with a variety of interpretive tables, exhibits, and props centered around birds at Yaquina Head. However, like many other events and activities this past year, WMBD also had to be adapted to fit COVID guidelines, as visitors were not allowed inside the Interpretive Center during the early summer months. Instead, with the support of both education technicians and volunteers, we were able to set up interpretive tables directly outside of the Interpretive Center and offer an assortment of informational materials regarding Yaquina Head’s seabirds, shorebirds, and falcons. We also handed out Spanish and English prizes from EFTA including coloring sheets, bookmarks, bracelets, stickers, buttons, posters, and cutouts that relayed WMBD’s theme of bird conservation. One of the education technicians even graciously donned a Brandt cormorant costume while operating our WMBD interpretive table! That was a great success with both visitors and employees, but I’m not quite sure what the nesting peregrines and their chicks were thinking as they watched over us from the nearby eyrie cliffs. In addition to hosting the interpretive bird tables and directing new visitors to different areas of interests, I roved around the site and interacted with novice birdwatchers by identifying bird calls, pointing out spots around the site to see certain birds, and explaining their lifestyles and nesting habits. 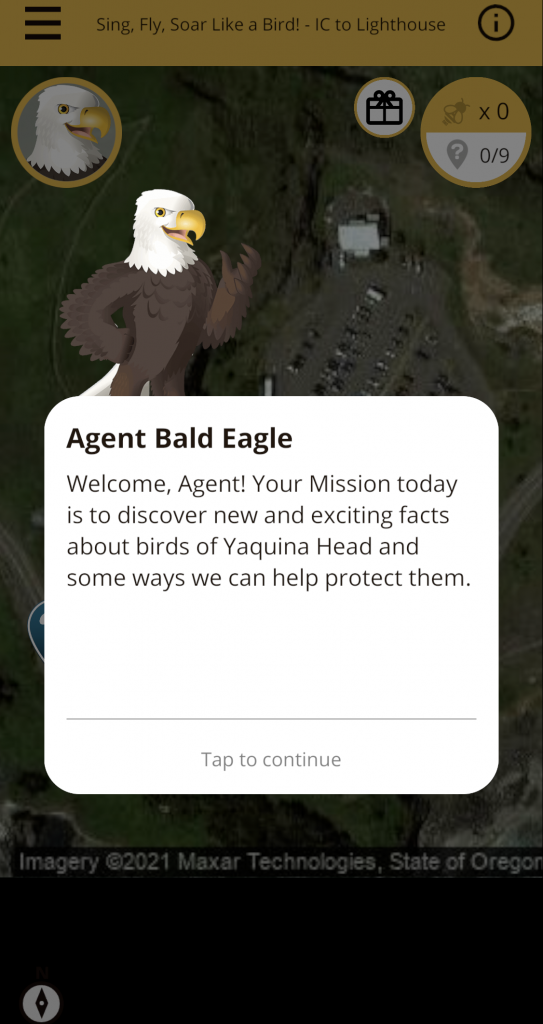 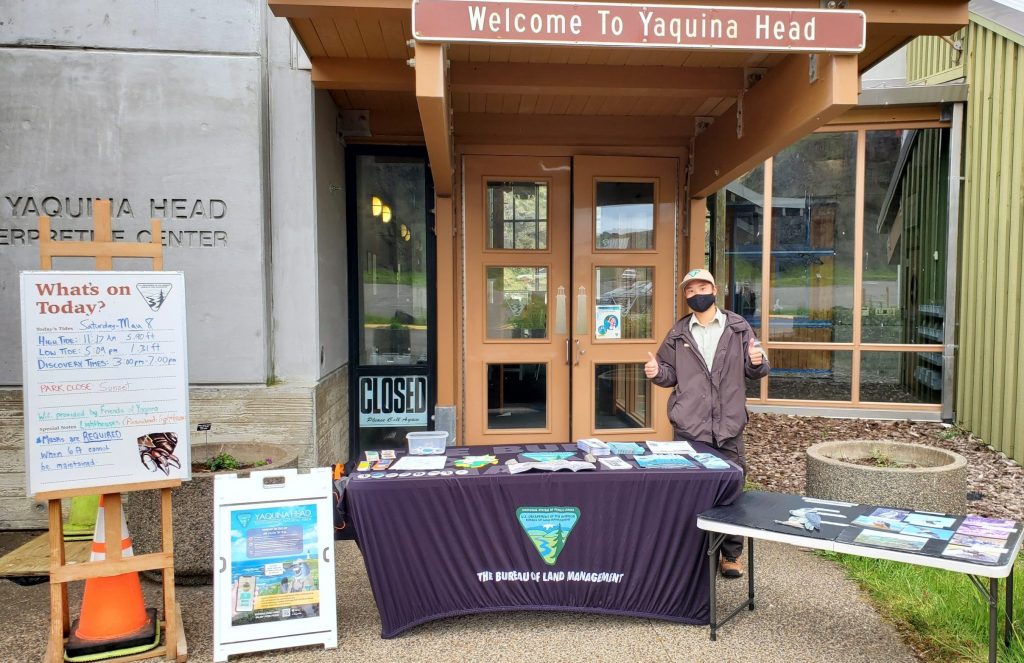 A popular activity at Yaquina Head and another significant component of this year’s WMBD, we were also able to offer visitors online virtual reality app challenges called Agents of Discovery missions. Anyone with a smartphone and internet connection can undertake these online missions that incorporate a phone’s camera and virtual reality to guide participants throughout the site while providing scientific information and questions about the area. I created my own mission with various bird questions and tailored it specifically to WMBD 2021’s theme of Sing, Fly, Soar Like a Bird. Consisting of challenges concerning birds’ migration patterns, nesting sites, and conservation methods, the WMBD mission on the Agents of Discovery app for Yaquina Head is one of the most popular challenges with an average of 45 monthly users and 200 downloads. Yaquina Head’s incorporation of virtual reality app challenges is yet another example of how this site adapts and progresses alongside technology and younger generations.

As more and more schools began summer break and the number of education programs started to dwindle, my focus shifted from environmental education to wildlife field research. Coordinated by EFTA and the BLM, I was fortunate enough to be able to assist Hatfield Marine Science Center researchers and Oregon State University graduate students with seabird monitoring and field research. My research project focused on the reproduction rates of two commonly seen seabirds along the Pacific coast’s rocky cliffs: pelagic and Brandt cormorants. My weekly schedule consisted of monitoring two cormorant nesting sites twice a week for four hours using a spotting scope. In total, over 40 cormorant nests were monitored, and each nest’s clutch size averaged from 2-3 chicks. Cormorant monitoring continued until all the identified chicks passed the 25-day period since hatching. In addition to cormorant monitoring, I was also able to participate in common murre activity watches which consisted of rotating 12-hour watching periods for a specific plot of murre nests and chicks. We noted any feeding or predatorial encounters and attempted to identify the type of fish or squid the parent murre would occasionally bring. 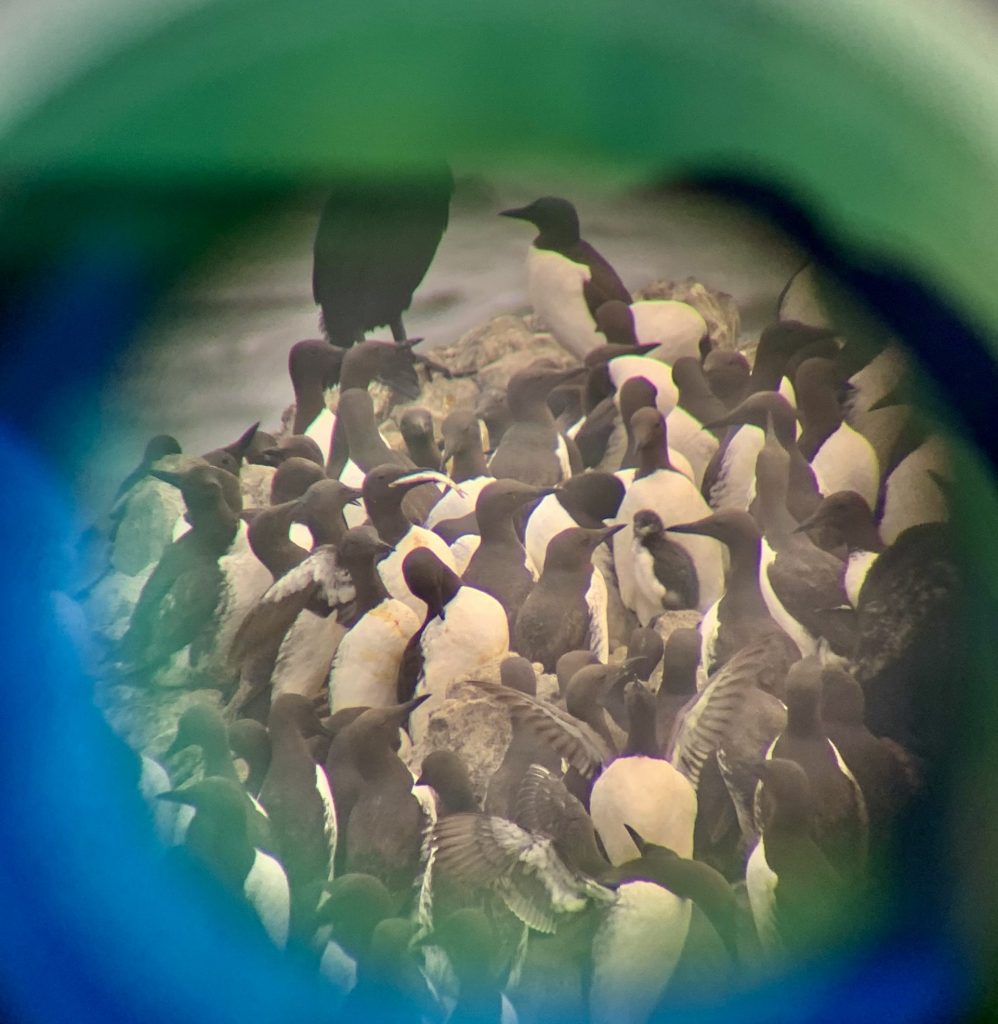 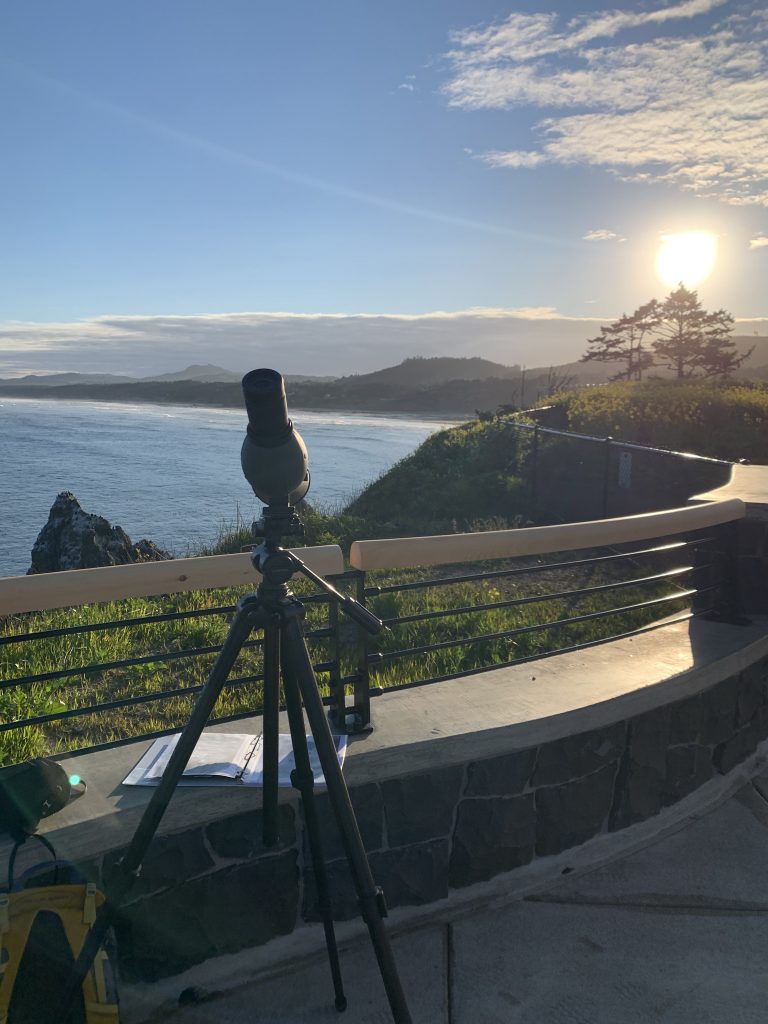 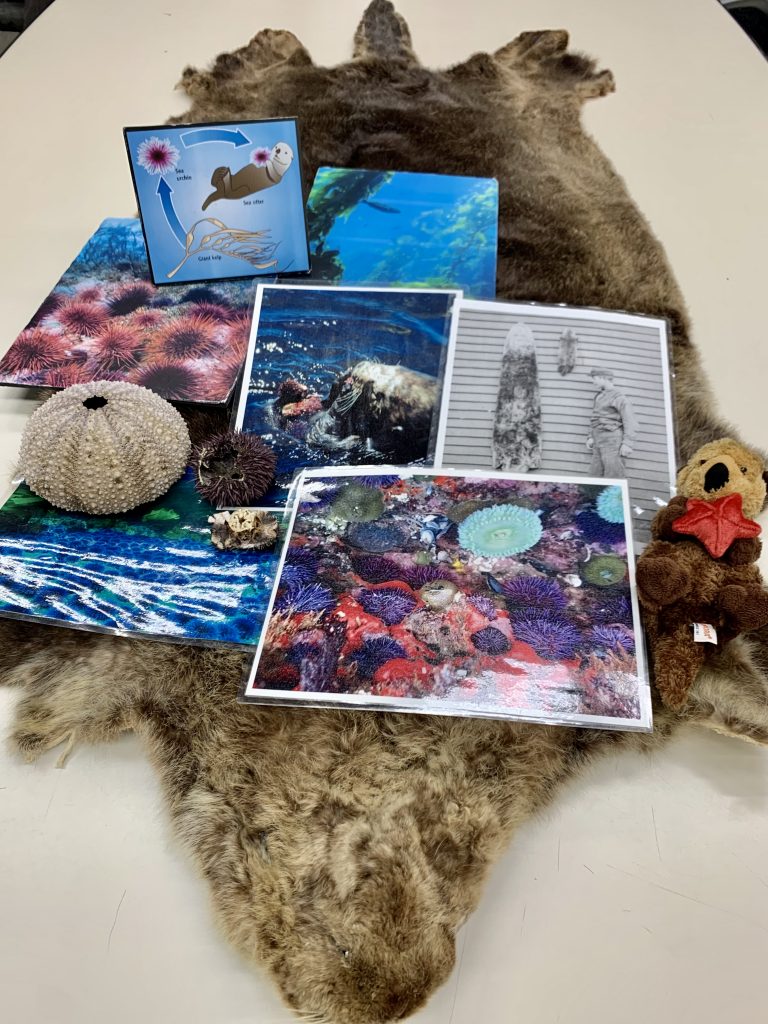 After receiving interpretive training from seasoned professionals and permanent BLM employees, I was also able to develop my own interpretive programs on the site’s natural and lighthouse history. While aiming to incorporate cognitive, affective, and psycho-motor themes, I developed a 10-minute interpretive presentation titled “Our Significant Otter” which went over sea otters’ tragic yet fascinating history along the Oregon coastline and their predatorial impact on coastal ecosystems as intertidal keystone species. Thanks to a specially obtained permit from the U.S. Fish & Wildlife, I was granted permission to use an authentic sea otter pelt for educational and interpretive purposes and incorporated purple urchin tests when explaining to visitors how sea otters’ consumption of urchins significantly influences marine biodiversity. 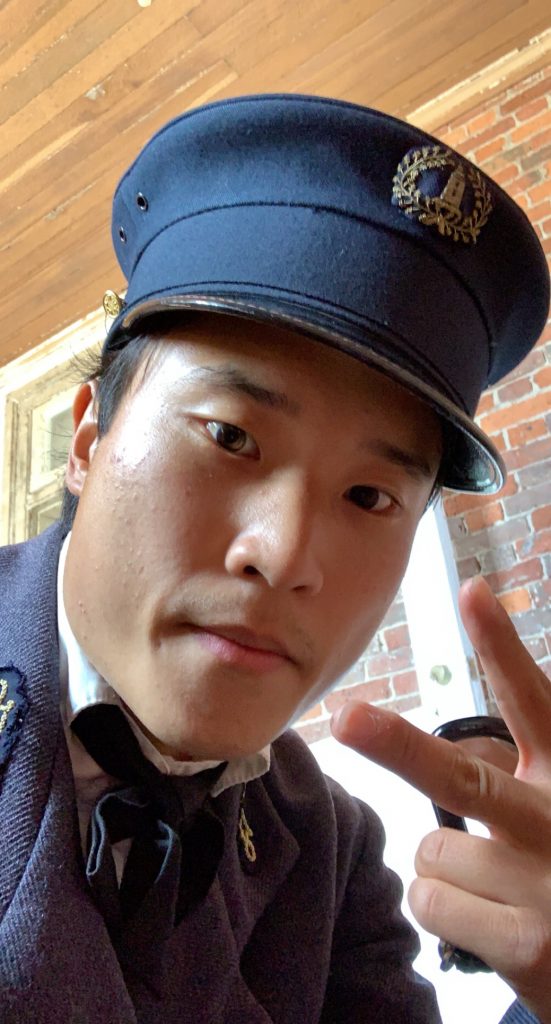 Not that interested in the surrounding wildlife? That’s a-okay! Historical interpretation was another project I was able to learn more about during the summer. First lit in 1873, the Yaquina Head lighthouse’s 93-foot-tall frame is filled to the brim with myriads of interesting tales, tidbits, and artifacts that can easily captivate any fan of U.S. history. Although visitors weren’t allowed inside the lighthouse this past season due to various renovation projects and COVID guidelines, rangers were consistently scheduled to rove around the lighthouse in historically authentic lighthouse keeper costumes and give historic vignette presentations. A relic of historical, cultural, and economical importance, countless interpretive themes and programs have been developed over the years by Yaquina Head employees. Hoping that visitors would connect and empathize with the former lighthouse keepers, I decided to create a program that focused on various facets of what it was like to live on an isolated, windy headland that stretches a mile into the Pacific Ocean in the late 1800s. In addition to going over the lighthouse crew’s rigorous duties and responsibilities, I discussed various leisure activities enjoyed by the lighthouse keepers, their assistants, and their families. Keeping COVID safety guidelines in mind, we tried to make our interpretive vignettes as interactive as possible by engaging with the audiences through motion activities, short skits, riddles, and direct dialogue. 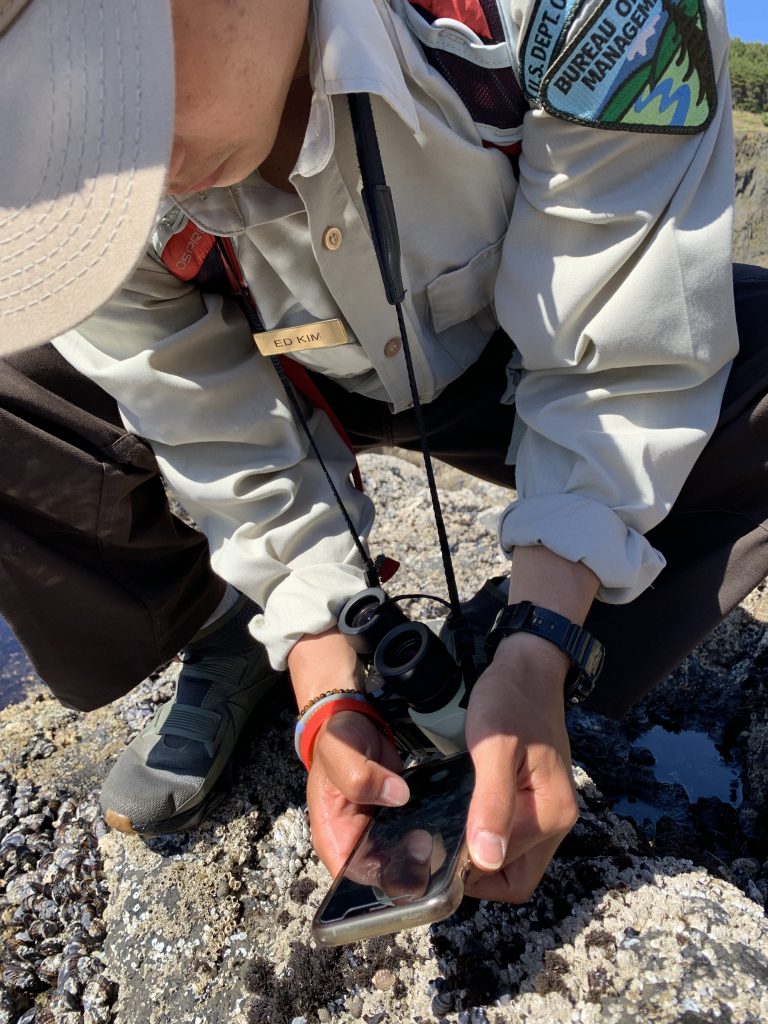 A skill that I was able to learn in previous positions and continue to work on at Yaquina Head includes drafting social media captions and photos. I have to admit that it wasn’t difficult to find inspiration when drafting online posts for the Friends of Yaquina Head Lighthouse Facebook page, as I was constantly bombarded with beautiful sights and fascinating yet appropriate wildlife encounters. As the memory storage on my phone quickly diminished due to my constant photo taking while roving and tidepooling, I created a number of posts showcasing unique tidepools interactions and seabird sightings at Yaquina Head. Some of my uploads were featured on The Bureau of Land Management Oregon and Washington’s Twitter accounts, and I also tied 2nd with my supervisor in our yearly lighthouse employee photo contest. *(After a recent check, I noticed that my supervisor’s photo has 7 more likes than my entry. I humbly and painfully accept my demotion to 3rd place. Congrats on being the definitive 2nd place winner, Alyssa) * 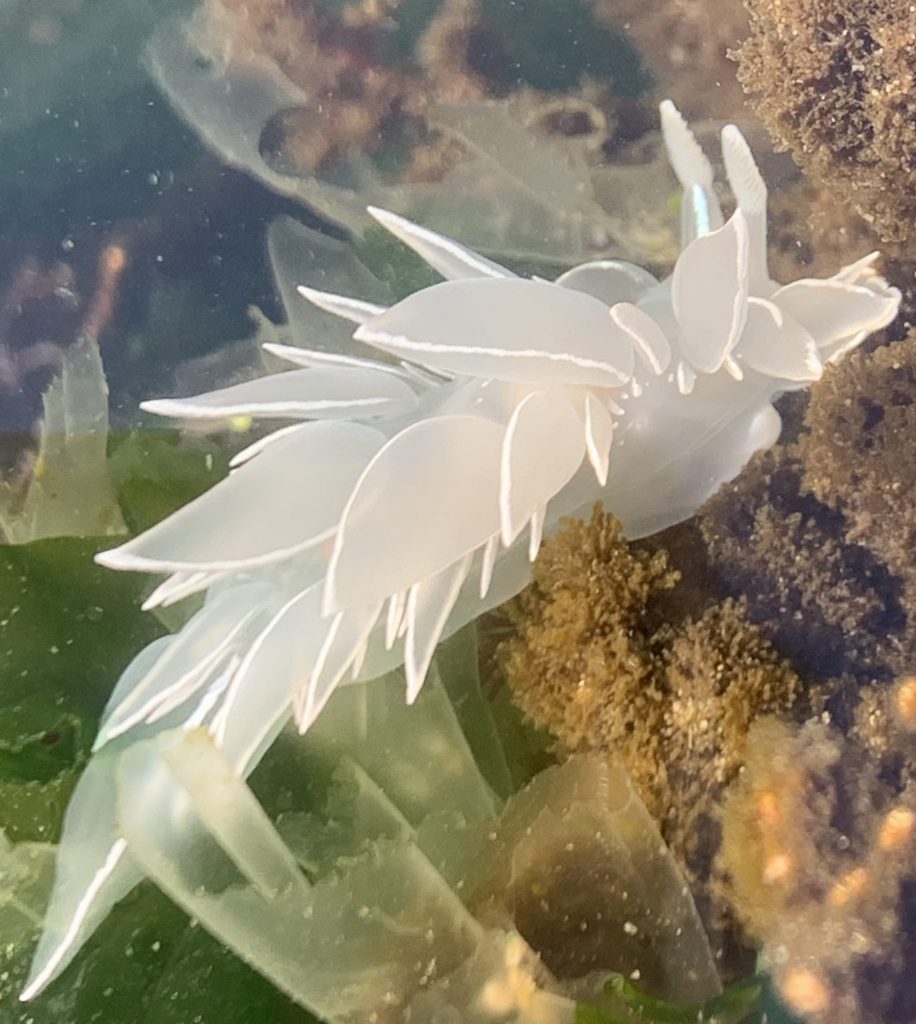 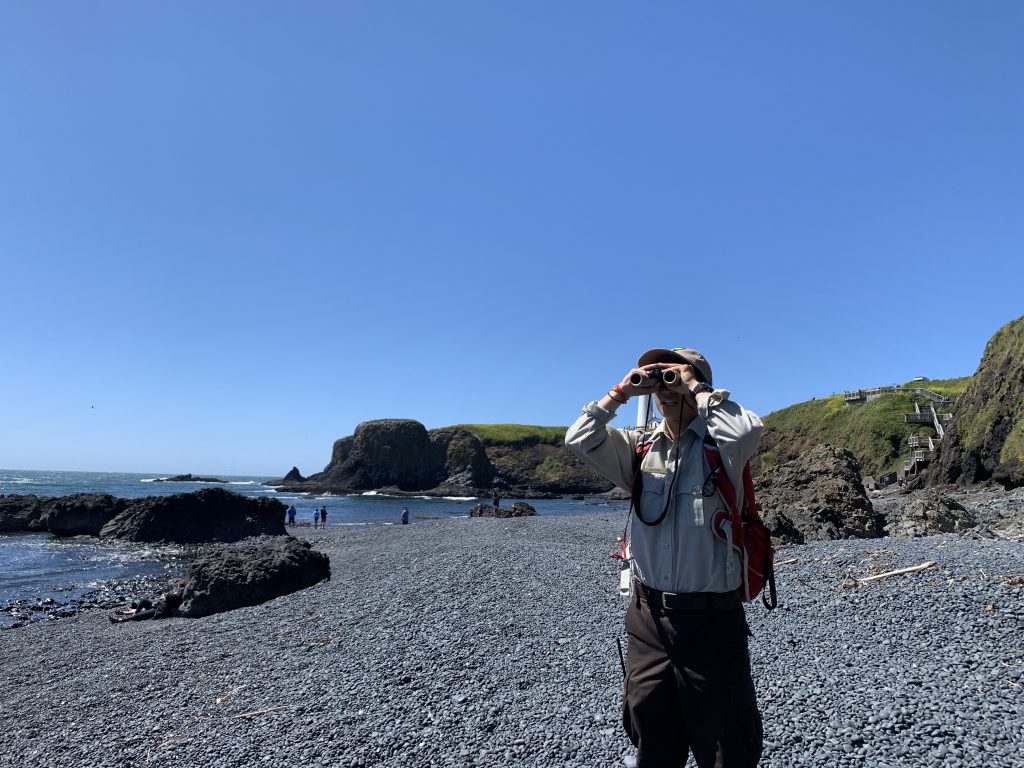 In addition to the specific projects listed above, I also had more general responsibilities throughout the past several months including roving around site, operating Coast Watch surveys, tending the historic garden, acting in educational videos, monitoring tidepools, conducting facilities maintenance rounds, setting up wildlife perimeter signs, and answering general visitor questions at our Interpretive Center.

I’m so grateful to have been able to experience a wide variety of facets of work at an Outstanding Natural Area with a team that was always willing to help or take a moment to explain something. Being part of such a well-run organization and site with necessary standard operating procedures, federal laws, and safety protocols has been an invaluable experience. In addition to learning more about wildlife biology, land conservation practices, and environmental policy, I also received valuable training on interpretation and environmental education. Engaging daily with the public in a professional and productive manner while also invoking scientific inquiries was an incredibly fulfilling experience, as you could see and feel visitors gain a new sense of appreciation for the environment and wildlife. Although the site itself is indeed outstanding for various reasons, it’s also quite an appropriate term to describe its employees and volunteers that care so deeply about the area and visitors. I’m proud to have worked and learned alongside the amazing team at Yaquina Head, and I can’t express my gratitude enough to EFTA for allowing me this incredible, lifechanging opportunity with the Bureau of Land Management and Department of Interior. 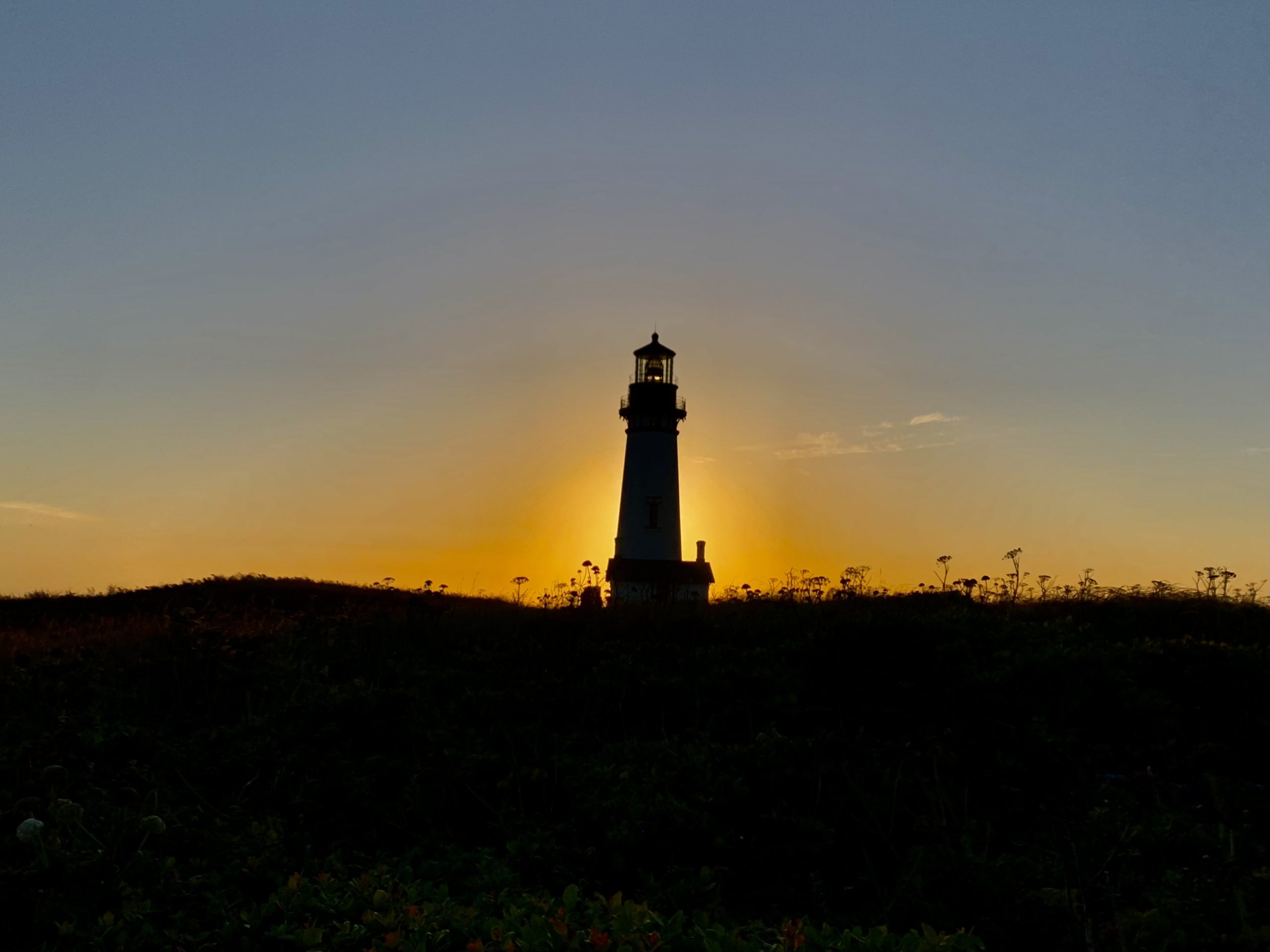