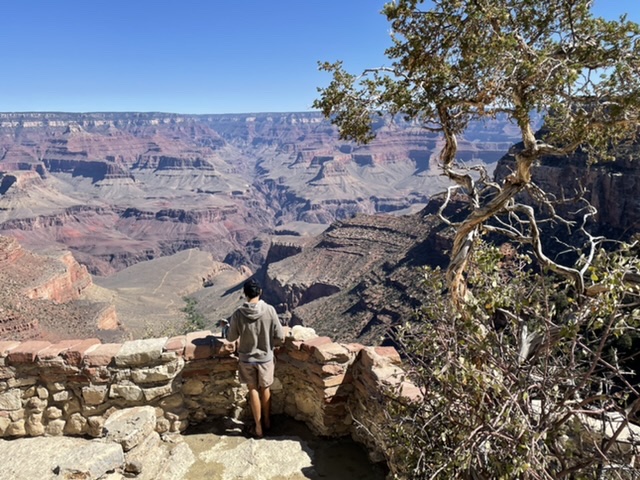 Hello! It’s been quite a while since my last blog post. Nonetheless, I have been busy learning about the different facets of my job. So, I have been reading tirelessly for the past couple of months! However, one of the many reasons why I was excited to accept this position was the opportunity to travel to one of the many wonderful national parks!

The Grand Canyon, one of the great natural landscapes in the world. Covered in multilayered rock formations, it is truly remarkable to see in person but is even more miraculous in person. The creation of the grand canyon started around 2 billion years ago “with the formation of igneous and metamorphic rocks.. above this layer of old rock lie sedimentary rocks”’ (NPS). Around 50-70 million years ago, through the “action of the plate tectonics, the whole region was uplifted” (NPS). Then, around 5-7 million years ago, the colorado river began to carve the canyon. Even today, the Colorado River is slowly at work.

It was a hot, muggy summer for all the folks on the east coast, so I was happy to get away from the sweaty, and dampness for 5 days. For most, Arizona is pictured as a dry and hot place, but I think that picture is misconstrued. The state has a very diverse set of vegetation, and it was surprisingly very green. All over the canyon, you can see a wide array of trees including firs, junipers, spruce, pine, and many more! Conversely, there is much different wildlife that lives within the park’s boundaries. This includes the famous/rare California Condor, bighorn sheep, and lots of elk near the grand canyon village! There are even pack mules that travel down the trailheads! The landscape of the region mixed with the wildlife makes it one of the most spectacular places to visit.

During my second day traveling around the park, my boss and I passed by a group of volunteers that were observing the California Condor and all of its glory through a microscope. The California Condor is the biggest bird in North America with its wingspan of about 9.5 feet, and weighing around 25 pounds! Currently, the California Condor is found on the endangered species list and is closely observed by national park employees to ensure that they will not become extinct. “In fact, in 1982, only 22 condors remained in the world. Thanks to quick action from the U.S. Fish and Wildlife Service and several partner zoos, a captive breeding and reintroduction program pulled the magnificent birds back from the edge of extinction. Today, the world population stands at 437 condors – 231 of them living wild in California, Utah, Arizona, and Baja California” (My Grand Canyon Trips). The California Condor is a huge deal within the parks. I don’t know how many times I heard a visitor yell “Condor!”, just for it to be a raven or a turkey vulture. It’s a remarkable bird, and I’m very grateful I was able to catch a glimpse of it.

The Hopi Tribe, one of the biggest tribes in Arizona, has left a lasting impression in the park’s south rim. The Grand Canyon Village, where the majority of visitors tend to visit, has a building there that is modeled after ancient Hopi pueblo dwellings. The building is called the “Hopi House”. The Hopi House, was the first of eight projects designed by the great architect, while she was not of Native American descent, she insisted on designing it as authentic as possible. Inside the Hopi House, “Most of the rooms have the typical ceiling of the Hopi style: saplings, grasses, and twigs with a mud coating on top, resting on peeled log beams” (NPS). Along with the traditional style of architecture, the Hopi House showcases traditional Native American arts and crafts!

Similarly, Mary Colter built another famous structure about 25 miles away from the Grand Canyon Village. The Desert View Watchtower, a 70 foot high stone structure, is hard to miss. You can faintly see the watchtower from the village! Like the Hopi House, Colter designed the tower with great adoration of Native American culture. “This particular tower was patterned after those found at Hovenweep and the Round Tower of Mesa Verde. Colter indicated that it was not a copy of any that she had seen, but rather modeled from several” (NPS). When you first walk into the tower, you will be immediately walking into the “Kiva Room”. The wide-open space was used as retail space, but more recently the space has transitioned into an open area where people can enjoy the magnificent views. Right now, the Kiva Room is the only area that the public is allowed to enjoy as the rest of the tower has been closed due to restoration. But, I luckily had the blessing of seeing the most extraordinary part of the whole structure. In the back left of the building, there is a small staircase that leads you to a wooden door. Once you open the door, you are immediately immersed in the spectacular. The room is surrounded by origin stories, that were represented by Hopi artist Fred Kabotie. In all, the room was three stories high, and each floor encompassed different views of the grand canyon.

Out of all my experiences, I’d say that my best experience would have been learning about the new collaborative proposal for the desert view visitor center. Like I mentioned before, eleven tribes have cultural ties to the grand canyon. But, I believe that most of the visitors do not know that. So, the park service has proposed to improve the desert view site from a scenic overlook to an inter-tribal cultural heritage site. The purpose of the project is to increase opportunities for authentic “first-voice interpretation, improve visitor orientation, and enhance the overall visitor experience” (NPS). Cultural demonstrations, along with stands for individual tribes, promote cultural significance to tribes of the region. The Grand Canyon is the first National Park to propose a plan to promote tribal relations within their parks.

I’d like to thank Dorothy Firecloud and everyone that was involved for allowing me to travel to Arizona! The experiences that I made were otherworldly and remarkable. Although I work mostly remotely, this opportunity gave me a perspective of what the parks are doing from all the work I am doing with Dorothy! If you ever have the opportunity to check out the Grand Canyon, the pictures don’t do it enough justice as it is simply spectacular!