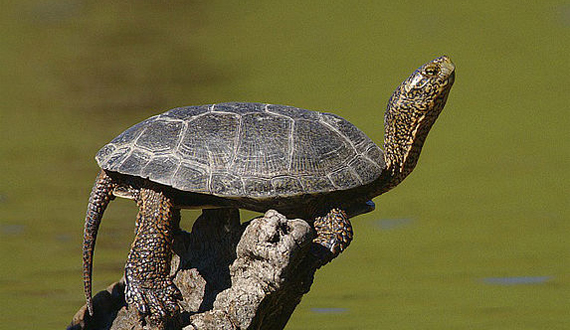 Like many jobs, Natural Resource positions at NPS require you to wear many hats. “Hats” for handling different species, various projects, and working at multiple sites (check my previous blog on more details about those). Due to the diversity of this position I get lots of opportunities to do different things, which means that my days don’t always look the same. However, the project I spend the most time on is the Western Pond Turtle monitoring program. Let’s jump in on what this project is and my role in it.

The Western Pond Turtle is an important part of California’s aquatic ecosystems, and is the only native freshwater turtle in California. However, due to fragmentation, predation, and habitat destruction WPT’s populations have greatly decreased over the years.  Surveys conducted in the early and mid 1990’s at Mountain Lake, Muir beach, Tennessee Valley, and Rodeo Lake concluded that mature adult WPT were present. The same surveys were repeated in 2014 and 2015 with no evidence of adult turtles. This population drop in many areas has landed the WPT on the IUCN vulnerable species list. In order to help restore population numbers, GGNRA started a reintroduction project with the San Francisco Zoo and Sonoma State University. Within this project, eggs would be collected from the nests and transferred to Sonoma State Lab where they would be incubated until hatching. The hatchlings were then moved to SF Zoo for rearing for about a year before being released back to the donor site and reintroduced locations. (Pictured to the left: A Western Pond Turtle caught and than released after the placement of a radio transmitter)

Now that the Park has released several years worth of turtles, post-release monitoring continues. Currently there are 37 turtles at Muir beach and 28 at Rodeo Lake that I monitor every week. Each turtle released has a radio transmitter attached to its shell, using telemetry equipment I can track down the turtle’s location. When finding turtle signals, I stand on both sides of the bank to make sure that I am narrowing the turtle’s location as best as possible. In any place where there are turtles located, air and water temperatures are recorded. All this information helps to better understand their movement and habitat use. (Pictured to the right: Me, Emma Force, using the receiver and antenna to locate released WPTs in Muir Beach)

While turtles are not classified as social animals, it has been fun getting to know their personalities and figuring out which ones bask and move together, and which ones are often located alone. I’m excited to see how the turtles move throughout the seasons and as the water levels change. Miigwech for reading, and talk to you soon.