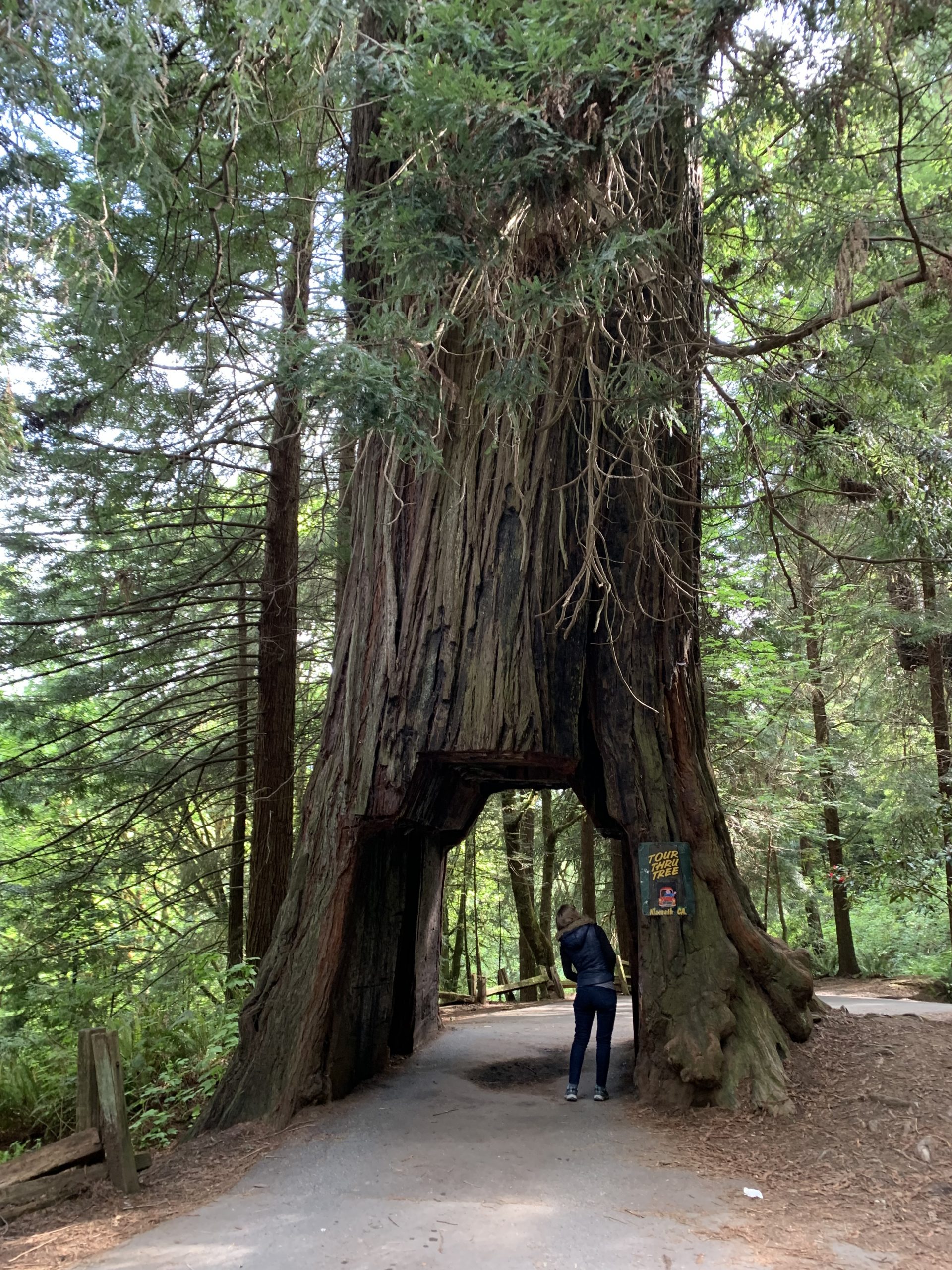 08 Jun Larger Than Life, The Redwoods

Here you are, below the massive stump of the redwood, in all its skyscraper design. Having tread on a chilly ocean breeze morning through the nearly jungle-thick ferns, plants, flowers, and hanging long threads of spider webs everywhere, you’re here. Finally! The large old growth redwoods you wanted to see and heard about! How could trees grow so large? Forget the Seven Wonders of the World! This is the eighth! This, is the Redwood National Forest!

The various areas of forests and natural landscape are managed not only by the National Park Service but also through a partnership with California State Parks and the non-profit Redwoods Parks Conservancy (RPC). This includes the Jedidiah Smith State Park, the Prairie Creek State Park, and the Del Norte State Park. The region is split between the north and south: the north is part of Del Norte County, and the south is part of Humboldt County.

Home to the world’s tallest and oldest and perhaps even largest trees is what the Redwood National Forest is known for! There are the old growth redwoods trees which are perhaps thousands of years old, being the famous large trees that tower over us, packed with biodiversity and life! Second growth redwood trees are younger redwoods that are not as large nor share as much biodiversity but they themselves tell a story of the park’s redwood rising project to help them grow into old growth redwoods. However, the redwoods are more than what meets the eye here. Besides their height and large size, redwoods tell a story of life’s resilience and ability to fight climate change. Their ability to resist fires, interconnecting their roots with one another for stability, and ability to be the world’s largest carbon sink besides the ocean gives more value to them than appearance. They are at the forefront of capturing carbon from the ever-polluted world, while also creating a world more than themselves, providing habitats for other plants and animals. Even in death, their felled bodies ensure life will go on as huckleberries, large ferns, and assemblages of plant life grow from it.

Here, the park sprouts the life of a temperate rainforest much more diverse than even tropical rainforests!! Having the highest biomass per square acre of the world, the dense redwood forests displays not only incredible size and height but also multi-layers of canopies that support a rich biodiversity. With such incredible verticality and size, the redwoods provide a home for many organisms and creatures to live in the canopies from the reintroduced condors to various salamanders to the rare endangered sea bird, the Marbled Murrelet. Other rare and endangered animals also take refuge here, like the Humboldt Marten and Northern Spotted Owl. Many conservation stories take place here, as well as a history of fighting to protect the redwoods and its inhabitants. These stories, lessons, and education about this beautiful place continue within campfire programs, visitor programs, and creative programs led by dedicated national and state park workers. Projects of restoration still continue! The Redwood National Forest was the first to spearhead watershed restoration and thinning of trees to allow diverse growing patterns of redwoods to ensure biodiversity stability and future resilience.

Even beyond that, the national park area extends about a mile off into the ocean, having about 15 Marine Protected Areas (MPA) off the coast protecting pivotal and critical marine habitats alongside explorable tidepools. Multitudes of crystal clear creeks provide shelter for young Coho salmons and returning salmon that migrate up stream to spawn, something the black bears eagerly wait for as well. But the redwood forest isn’t just a hallmark of biodiversity — it is also the home to many native tribes that thrive today, most well known being the Yurok and Tolowa people who have lived amongst the forest for generations. Their traditions and practices echo their respect for the redwood and its important animals as they are also a driving force behind many conservation efforts such as the reintroduction of condors, protecting creeks for salmon, and restoring the critical watersheds of the park. Their survival through a dark history are not forgotten, as they work with the park to deliver their stories of resilience and continuation to the public. The park, plants, animals, the native tribes, and ultimately us, the visitors, all come together under the gentle shade of redwood giants, to forge a path ahead to protect this amazing environment and the world.