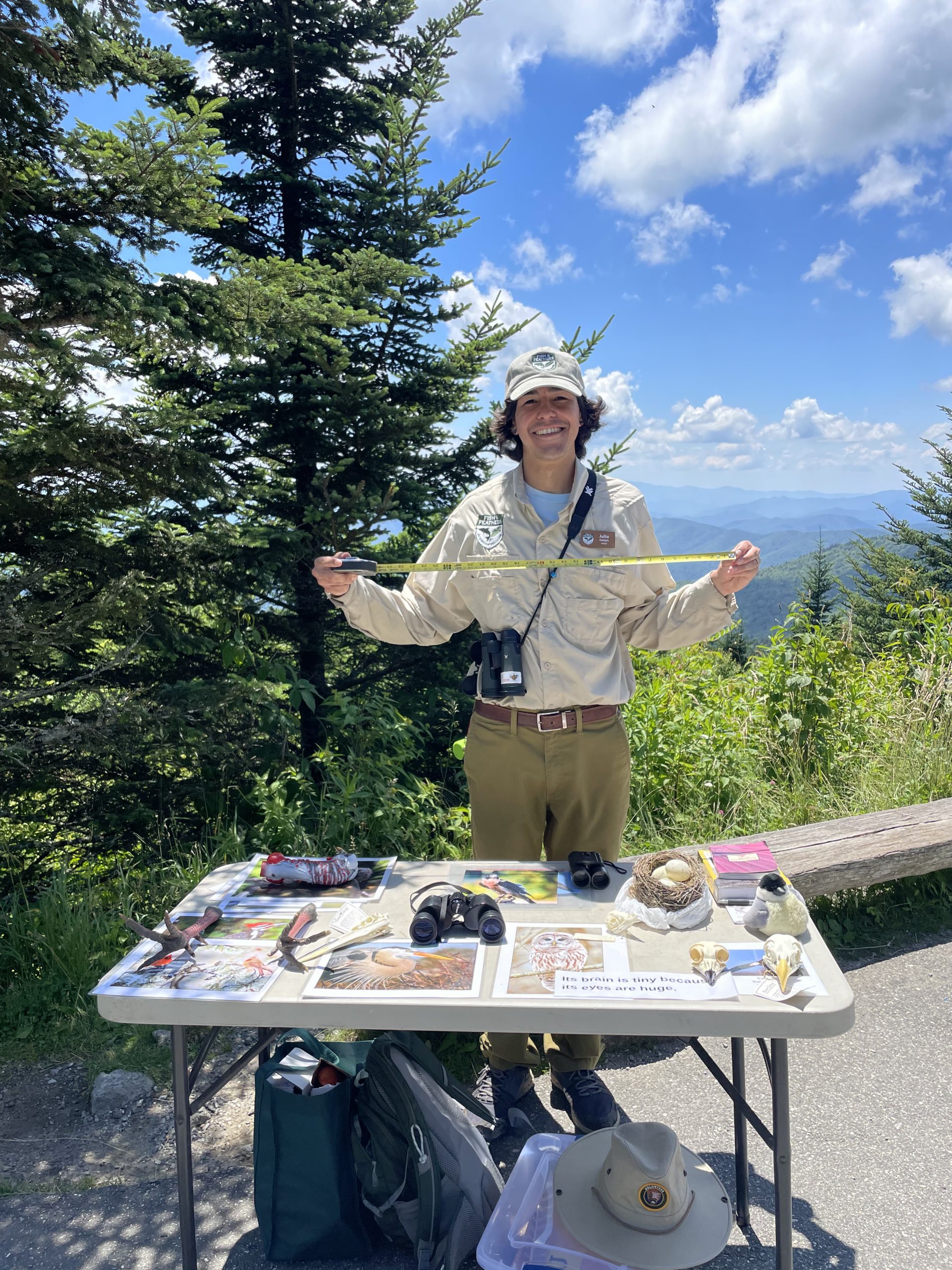 It is in Clingmans Dome, standing at 6,643 feet, the highest peak of the Great Smoky Mountains, where I would set up a birding station. This was also the first time I led a program, the Peregrine Falcon Program. The goal of this program was to get people into birding in the park and to raise awareness on endangered bird species that live in the park, such as the Peregrine Falcon. Clingmans Dome is an amazing place to set up a program, especially because you could have a meaningful interaction with around a 1,000 visitors in just a couple of hours. I had 760 visitors come to my birding station.

To be honest, most visitors don’t care about birds and avoid my birding station, they would rather attend a bear station. There were a lot whose curiosity led them towards my station and it was with great happiness that I would help them. No conversation would be the same, with one visitor I would talk about owls and fun facts about them, with a second visitor I could talk about the bird diversity in the park. Whatever the reason, I would began talking about birds, and always lead to the Peregrine Falcon. The reason I chose the Peregrine Falcon is because it is a bird of prey that used to be very common in the Smokies. Due to the use of pesticides, he abandoned most nesting grounds in the park. It wasn’t until 1980, when we released breeding adults with hope of having them nest in the park again. With luck, we were able to achieve this, the only confirmed nesting grounds are found at Alum Cave Bluffs, they are rather impressive if you get the chance to see them enter and exit the nest. My program would help raise awareness on how to protect Peregrine Falcons, how to continue birding safely in the park, and getting people to know the importance of National Parks.

These are the Alum Cave bluffs where our Peregrine Falcons nested.

A fun idea that I would complete with the children is that I’d used a measuring tape which I’d altered. The measuring tape contained the wingspan measurements of common birds in the park. I would ask a kid if they’d wanna know what bird they are and that I would only have to measure their wingspan. The longest of them would be Great Bald Eagles, others would range around Northern Screech Owls, and Canadian Goose. That would always make the visitors burst out laughing, especially when I told them they were Wild Turkeys.

Being honest with myself, I was having more of a blast than the kids, just seeing all the parents take pictures of their laughing children would let me know this was worth it.

You’d think this would be a nightmare, being under the sun for 8 hours running my program, the sun was indeed a killer. What I don’t agree with was seeing this as a nightmare. I had such a blast that by the time I ran out of voice, it was already time to pack and leave. This was without doubt an amazing premier for my birding program, I would later meet some visitors from Clingmans Dome in other parts of the park where they would ask me to measure their wingspan again. I learned as much as the visitors during my research for this program. I learned about owls, bird diversity and habitats in the park, nesting and breeding season importance, scientific research in birds, and the return of endangered bird species to the park. This was all information I would pass on to visitors, and although they did not absorb all of it, I am sure some part of my program stuck with them. Here are some pictures from my program. I will also be leaving an online link so you can see my Peregrine Falcon Program at Clingmans Dome through YouTube.

In the end, I think I convinced a couple of people to get into birding in the park