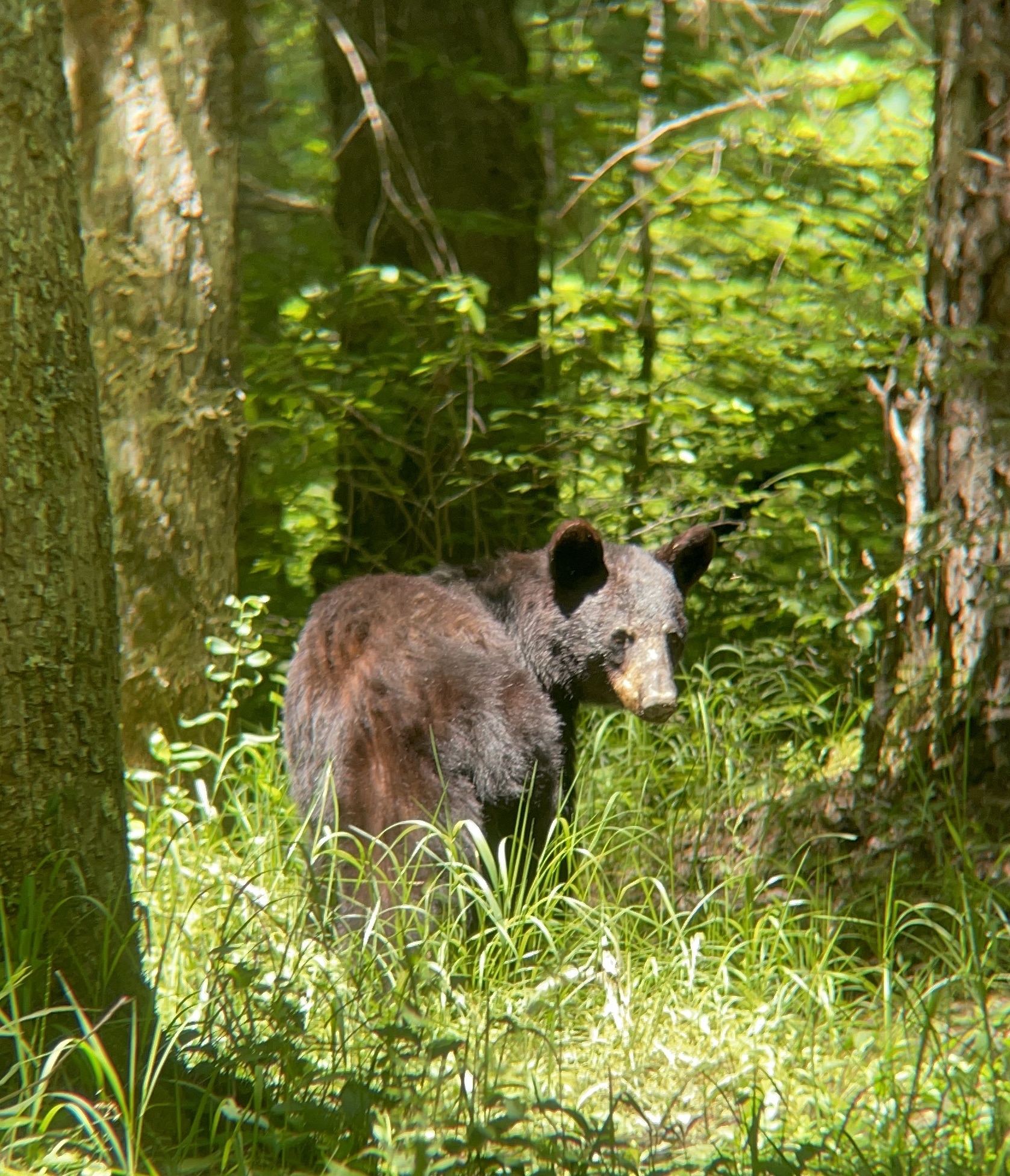 30 Sep Bears of the Smokies

Bears are such wonderful and interesting animals. Puerto Rico doesn’t have big mammals other than cows and farm animals. Seeing 25 black bears has been one of the best parts in working at the Great Smoky Mountains National Park

Black bears were without a doubt the main reason why I applied to the Great Smoky Mountains National Park. Although bear populations were struggling prior to the the establishment of the national park, populations have now recovered and present over two bears per square mile. Approximately 1,400 – 1,800 black bears now live in the park, one of the highest densities throughout its range. Since black bears were an attraction, I searched them through the park whenever I could. Most of them were seen in the north district, specially the Cades Cove Valley. In this blog I will be documenting my favorite black bear interactions across the park.

What are the chances that the first black bears I saw was a mama bear and her two cubs crossing the Cades Cove loop road. Truly an unforgettable experience, this will always be the first memory that comes to mind when I talk about black bears. Although I’ll only show these three bears, I saw seven blacks bears this day.

This was also in Cades Cove, my second visit to it. As my normal visits to Cades Cove, I was looking for bears, I decided to go through the Abram Falls parking lot cause I had heard of bear activity near there. Arriving to the scene, visitors spoke about seeing a bear in the Elijah Oliver trail, which can be accessed in the Abram Falls trailhead parking lot. It didn’t take me long until I found the bear walking the trail, same as me, Catching him off guard, I was able to take decent pictures with my binoculars. After he ran from me here, I walked the trail just a little bit more. As I spotted him again, he. began to climb a tree. My heart almost escaped from my chest as I saw it climb up the tree effortlessly.

My jaw reached the floor as I witnessed my first bear climb a tree. This moment turned into one of the most awe experiences in the Smokies wilderness,

This encounter is actually the record for most bears seen in under 1 minute. We were taking the Metcalf Bottoms entrance to the park from Wears Valley, a road known for bear activity. I actually saw a Red Fox there one morning. As we enter the park, I spot a mama bear and two cubs to the side of the road, since we were driving fast, we had to turn back. Not even a hundred yards later was a large male black bear walking as well. I could not believe my eyes, four bears in under a mile was a crazy memory. Not only that, the mom and her cubs got close to the cars and they actually started climbing a tree.

This bear holds a very special place in my heart, and for various reasons. While driving pass the Cades Cove Missionary Baptist Church, as I look to my left window, I witness a large American Black Bear running at top speeds and keeping up with the 30 mph car. I could not believe my eyes, I’d then immediately park in the church parking lot and begin searching the area. I did find a cool dropping from a bear that clearly likes berries. A moment later, I see the bear running through the forest on his way to cross the road.

I began to follow him into the forest and I lose him, As I wonder on my own, I notice one of the most incredible moments in the Smokies. I look up to see a pair of Pileated Woodpeckers working in a tree.

The biggest and most unexpected black bear to have been documented by myself. I was driving the Roaring Fork Motor Nature Trail, this drivable loop is just outside Gatlinburg, a tourist favorite city in the north entrance to the park. Unwanted trash from businesses and hotels traslack bears eating off . The trash cause them to grow bigger than a natural bear. A natural adult male black bear can weight from 200 – 300 lbs, trash bears can grow up to 400 lbs. Just see the video and you’ll notice its gigantic size.

This was without doubt the largest black bear I’ve ever seen. I want to clarify this is a large black bear that probably only eats a good diet like berries, nuts, and some meat, unlike trash bears that get very big because of the the trash they eat. So this would be the biggest natural black bear, discounting the trash bear from Roaring Fork. I could not get very close for he had ran away very fast. I still got a good documentation for the memories.

What a perfect last day. I would be leaving the very next morning, august 6th, to Puerto Rico. I knew I would dearly miss this park, all I wanted was to see one last black bear. And so the park heard me. I would be driving to Clingmans Dome to spend my last sunset there and later see salamanders in the Spruce-Fir Nature Trail. As I am driving up, I notice some traffic and knew it had to be a bear jam. Minutes later I see it by the road eating flowers. He then continued to repeatedly cross the roads. I parked to the side and just stood there seeing it be a bear. There were moments where I had to scare it off a bit so it would eventually leave. I spent 30 minutes admiring him and taking pictures.

The Great Smoky Mountains is are visited for a couple of reasons, its hiking, salamanders, birds, or even Appalachian mountains, although I enjoyed all of those, I came here for the black bears. I propose to myself to see the most black bears I could, every time an opportunity opened for me to visit Cades Cove, I would happily drive the two hours to get there. These are majestic creatures, loving mothers, and keystone species of the Smokies. They are remarkably intelligent animals, even more intelligent than some visitors. I will be forever grateful for having the opportunity to be here sin the Great Smoky Mountains National Park and witness the king of the Smokies. I was lucky enough to leave the Smokies seeing 24 black bears, I’ll always remember that number.

“The American Black Bear is embedded in the lore, legends, and legacy of the Great Smoky Mountains National Park”