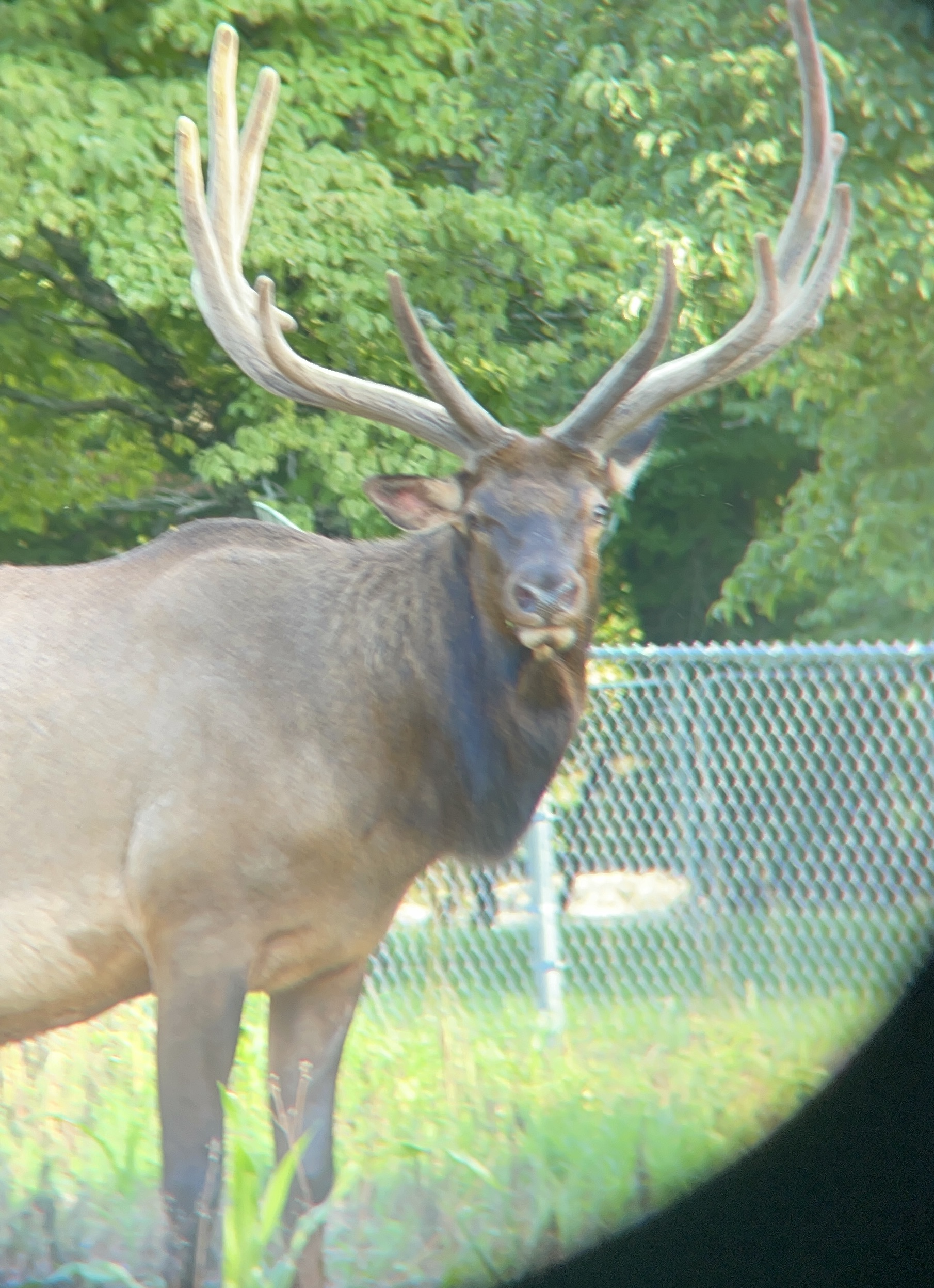 01 Oct Elk of the Smokies 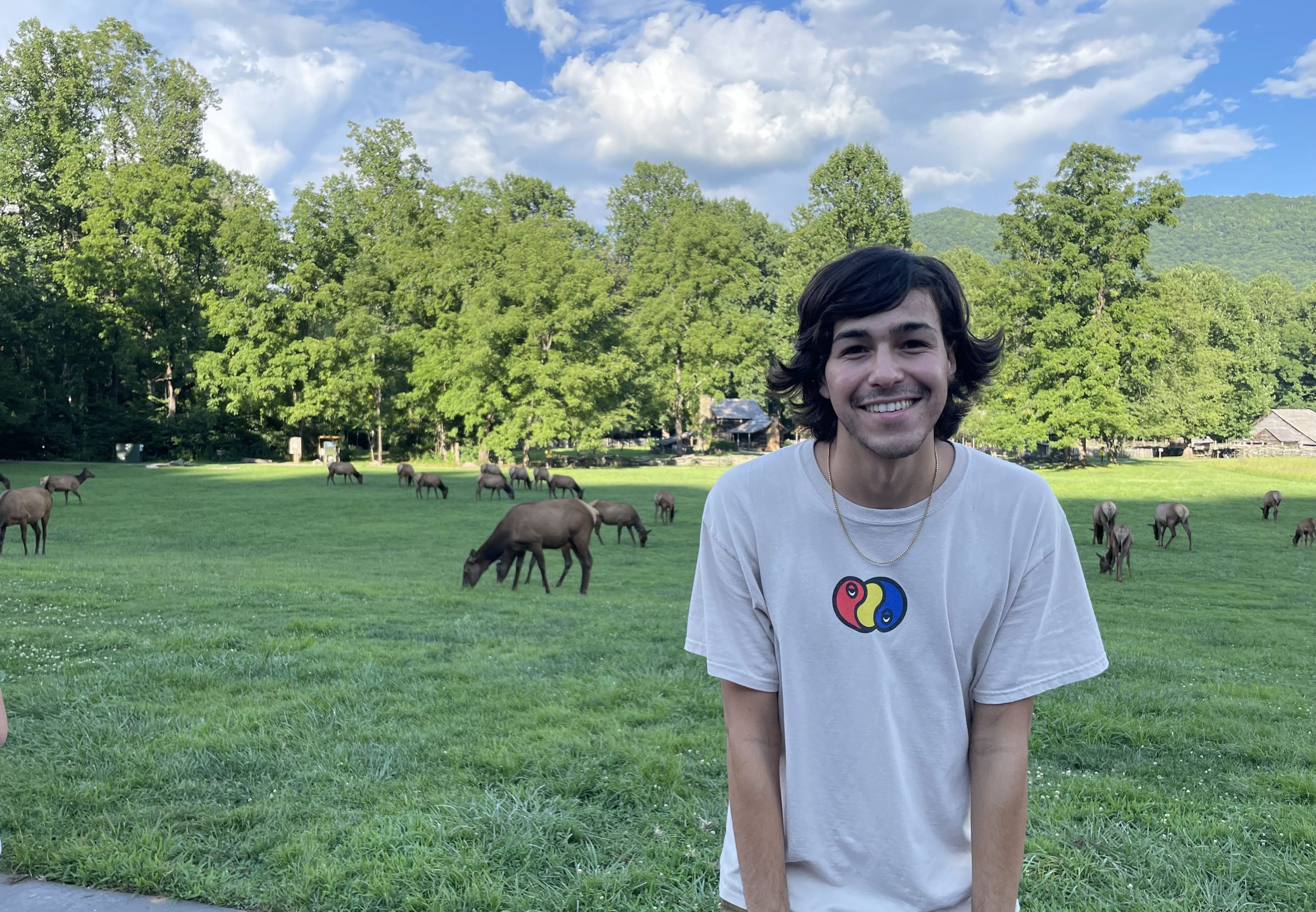 I used to see the elk from my housing window, from the visitors center, from the car, from my morning walk to work, and then back home. The elk were a daily part of my life, and a part that I really enjoyed.

Elk were probably the animal I got to see the most in the Great Smoky Mountains, the reason for this is no mystery. Elk were very common in the southern Appalachian Mountains. Due to excessive hunting sand deforestation, elk were eliminated from North Carolina and Tennessee in the late 1700s.The eastern elk subspecies (Cervus elaphus canadensis) is extinct. In 2001, 52 elk (Cervus elaphus manitobensis) were reintroduced to Cataloochee Valley. 20 years later, we now have two populations established, around 90-100 in Cataloochee Valley, and 90-100 in Oconoluftee Valley, adding up to around 200 elk specimens in the park and growing. Since I was working at the Oconoluftee Visitors Center, and my housing was just a 5 minute walk to work, I got to see them almost every day. I will document in this blog some great pictures I took of them. Since I was stationed during summer, may 20th to august 5th, I was unable to see the rut season, when they herd up and have rubbed their velvet. This starts during September, and has its peak in October, hopefully I’ll witness it another year. One thing I was lucky enough to see were all the calves being born and growing.

I shared the Oconoluftee Valley with them for almost three month, and if there is something I learned from them is to respect their personal space and admire them from a distance. Elk are joke, especially bulls during the rut season. Both females and males can charge at you with no warning trying to protect their young or territory. Thats why I always brought my binoculars with me everywhere, you never know what bird, bear or elk is nearby. Having discussed the danger of viewing them, Elk are majestic creatures with very interesting behavior. I had a blast seeing them eat grass, take care of their young, and grow those antlers for the rut. I definitely go to see more mamas than papas since the fathers are absent during the summer, independently growing their antlers from the rest of the herd. Female elks can be called cows, male elks can be called bulls. Cows would spend the summer giving birth and raising their young. Here are some cow and bull pictures I took during the summer.

I will also document this poor mama who lost her life due to pregnancy issues. I understand the calf is fine but his mom did not survive the birthing process. Bones are missing because park officials took them.

As previously mentioned, summer in the Smokies mean you’ll see bear and elk calves. Although getting close to them is not recommended, I was able to take some good pictures. I love when they show off their white spots at a young age.

Bulls may have been harder to see since they were out growing their antlers. Most of them don’t even stay in the park, they’ll be in Cherokee or Bryson City doing their own thing. For example, this one was 30 minutes driving from the park. He’ll make his way back into the park around September to show the others who’s boss. You can appreciate the velvet in their antlers, it looks like hair, these are actually filled with arteries and veins that help to grow the antlers. Male antlers can grown an inch per day.

“You talkin’ to me? Well I’m the only one here”

In this section I shall document videos and pictures of when the Elk got into small herds. the best part was ending August, it almost seemed as if rut season would’ve started a little bit earlier this year. When I first arrived, I would see the Elk small groups of 5-10 at most. I wasn’t until my last days that they started herding up. The biggest Elk herd I spotted was around 40 Elk.

On some work days I’d be sent to Cataloochee Valley to explore and do programs. I was only lucky enough to see them in two different days during night and day. These elk have their own big males that control the herd, separate from the Oconoluftee herd. I have only these documentations of the Cataloochee herd.

One must be wary of two things during Elk viewing:

Other than that, Elk are amazing, intrinsic, and beautiful animals to admire. They give a calm mountain life vibe. I will never understand how humans were so ignorant to push the Eastern Elk species to extinction. I do have to thank the park officials for reintroducing the Elk species that now dominate the Oconoluftee and Cataloochee Valleys. The Elk will be Elk and cause all types of crazy, they will walk to my window, block my driveway, cause park jams, charge at visitors that try to pet them, and leave antler holes in cars during the rut season, but I don’t think the park would be the same without them. I got to see mama elk take care of their young, I got to see a female mama that lost her life for her son, I got to see the males grow their antlers, and finally, I got to see them herd up, not too bad I’d say.

I hope I never see the day again where these beautiful creatures are hunted down.

The real prize is seeing them alive in the park.