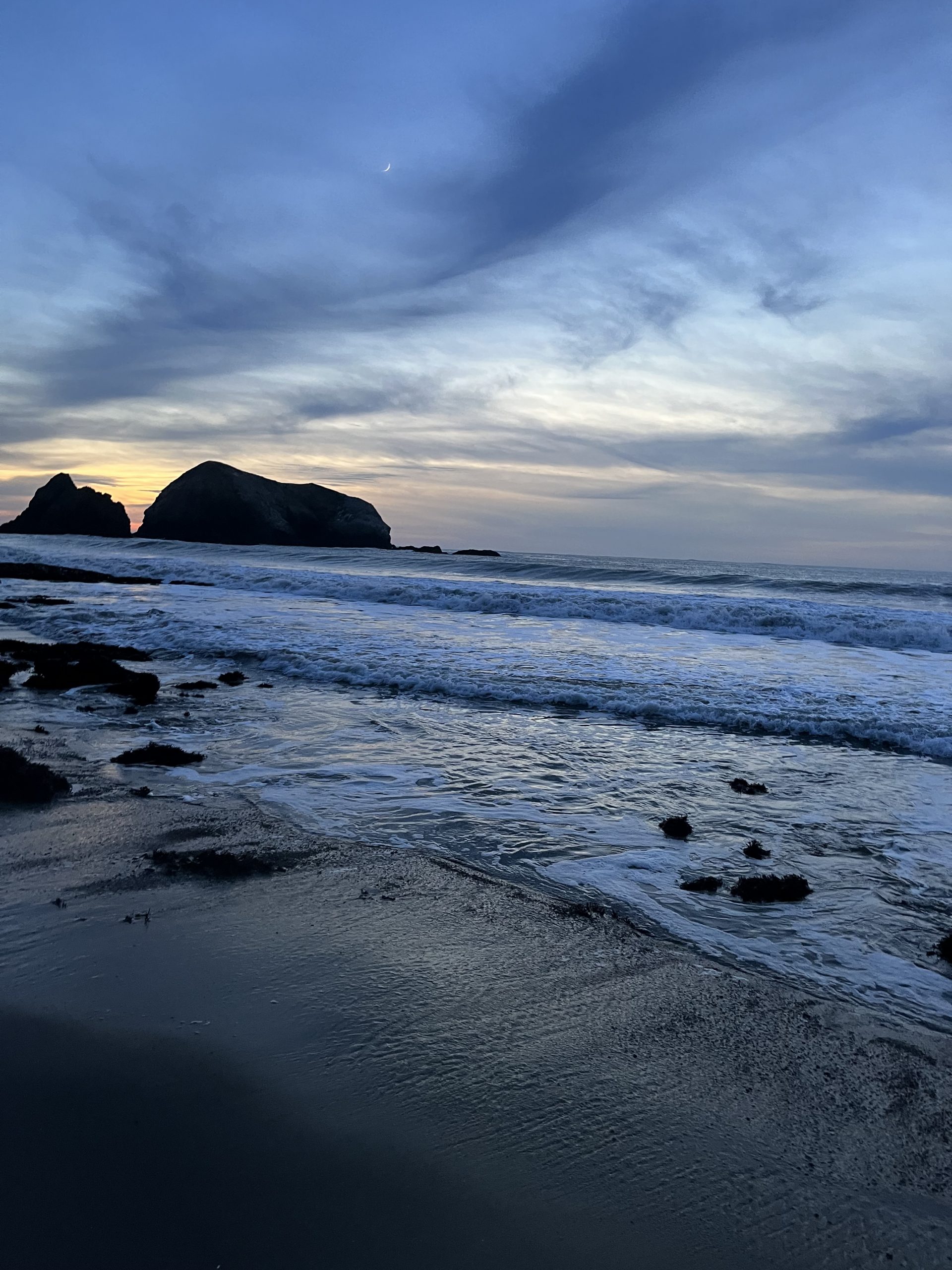 “He was a slice of pizza and he was very overconfident” – Eric.

Ivan here, back behind the keyboard once more in a young 2023. Nature and airplanes all conspired to give me the opportunity to spend Christmas day at the dorm and Rodeo Beach. The beach gave me a very nice sunset to look at as I walked, so I took a picture and put it at the top of this post. Please notice the moon. The airplanes eventually relented and I did all my traveling, but I was one beach sunset richer.

What about the planting?

Last time, I talked about planting grass seeds. We’ve done a lot more of that, planting lines of seed from a mixture of two native bunchgrasses: Blue wild rye (Elymus glaucus) and Purple needlegrass (Stipa pulchra). These two live longer and stronger than the invasive annual grasses, but they take longer to enter an area on their own. Our planting establishes the grass we want before the invasive grasses dominate the plot. One week we had a team of contractors come help us plant lines, and boy oh boy did they go to work. They were a big boost and we got a lot more seed in the ground much faster than just our small team could have done.

If you’ll remember, last month the birds were unseeding our lines behind us. This month I’m pleased to report that we’ve reached a suitable stage in our Bird Defense Plan, involving two types of coverings for the seed lines:

We use the stronger fabric near the bushes, where birds hang out and can easily reach the lines. Farther from the bushes we use the plant fiber, since the birds spend less time in the open. The braver sparrows still steal some from these lines, but not enough to make us mad.

Lately we’ve been getting into planting plugs, which are plants that have already grown some in a greenhouse. Plug planting has the same goal as seed lines, but with more of a focus on quality than quantity. The plugs take a little more time to (trans)plant, but they have a better chance of survival. Last Friday some of the other EFTA interns came down and planted a bunch of grass plugs. On the way back,  we stopped by Taco Bell on the beach, and it was just as novel as it sounds. I was too enchanted to take any pictures, but I’ll be back.

I left on a cliffhanger for frogs last post, and I made you wait through the beginning of this one before I even mentioned a frog. Sorry. The frog in question is Rana draytonii, the California red-legged frog (CRLF), which is federally listed as a threatened species. Across the entire GGNRA we monitor potential breeding sites for CRLF eggs to give us an idea on how the population is doing. I’ve gone egg searching three times now to the same site. The first two we found eggs from another frog species and even a dead adult chorus frog, but no CRLF signs until January, when we saw lots of egg masses! Also, in between ponds we saw a weird globby thing that remains a mystery.

In other news, some other interns and I spent a day at Ocean Beach with Ana and her team pulling European dune grass to prepare the way for American dune grass in the future. We got to see snowy plovers resting nearby in the sand (very small, very round).

And finally, here are some small things that are nice from the last month: a newt, a millipede, a tiny little flower, some overalls that I found, and (not pictured) a British man on a horse.